56 Permit in ONE WEEK in the Punta Pajaros Cay, Mexico 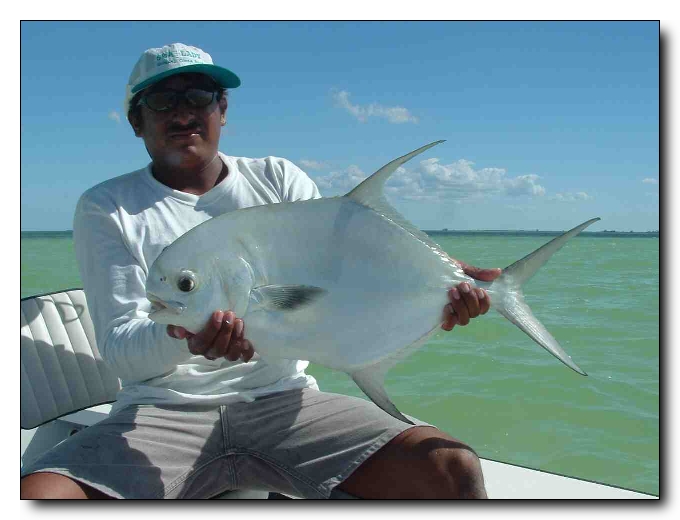 Both bays, located within the 1.3 million acres Sian Ka’an Biosphere reserve, are considered among the world’s top flats fishing destinations for bonefish, tarpon, permit and snook.

The lodges typically open the 1st or 2nd week in October, and excepting 2-week periods over Christmas and Easter, are open until the middle of June.  The common perception is the best time to fish these areas is March, April & May, and this is when high season rates apply.

While the spring months are excellent, I think many anglers are missing what may be an even more productive season to fish AB & ES.   For years I’ve encouraged anglers to fish Ascension Bay or Espiritu Santo the normally lightly booked October/December season.  I’ve had the pleasure of fishing Ascension Bay a number of times, and five of these trips have been during the months of October or November.  I’ve had good to outstanding fishing during each of these fall trips. 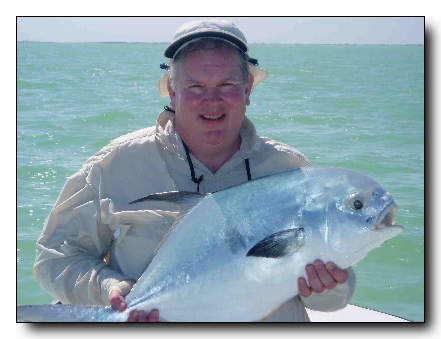 Doc Foster
There are a number of reasons I like the fall fishery.  First, most of the lodges close or are very lightly booked through the rainy season, early June through early October, and this lack of pressure promotes “happier” and less spooky fish on the flats.  The migratory tarpon start showing up in late April and can be found in good numbers through November.  The snook fishing seems to be at it’s best during the fall, as soon as the water clears.  Water temperatures during the fall are usually at a consistent optimum, particularly for permit, which take flies better in warmer temperatures.  And lastly, the rates for the fall season are considerably lower than during high season.  Why wouldn’t anyone go in the fall? 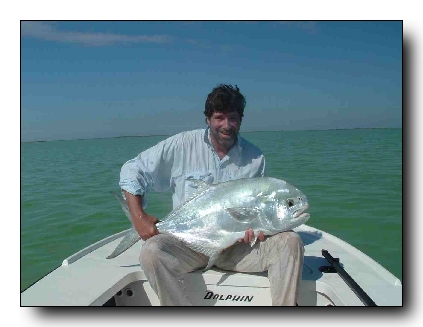 Angler Adventures – Doug Schlink
To illustrate just how good the fishing can be during the fall, witness “The Week” of November 6th at Casa Blanca and Playa Blanca Lodges.  I was privileged to accompany a group of clients and participate in the all time record-breaking week for both permit on fly and grand slams!

While a group from a Colorado Fly Shop headed 12 miles south to fish to Playa Blanca, I joined the Streams of Dreams Fly Shop group at Casa Blanca. Casa Blanca normally accommodates 20-22, but as mentioned, the fall is frequently lightly booked, and our party of 8 had the entire camp to ourselves.

The week got off to a good start, with everyone getting numerous shots and 3 permit landed that first Sunday.  Among the anglers to score on day 1 was “Doc” Ralph Cifaldi, using his own variant crab pattern with a long tail of dyed polar bear.  Day 2 was the banner day when the group tallied 10 permit landed.  But Ralph was the top rod scoring a “Hat Trick” – three permit on the fly, on his crab pattern!

Day 3 was nearly as good with 8 permit landed by the group.  And it was the good Doctor’s good fortune padding the count again, as he landed another 3 permit including one over 20 pounds, on his same crab pattern!!    Ralph now had 7 permit on fly in 3 days!  We began to think there might be something to this fly and Ralph stayed up late that night at the vice and generously gave each of us one the next morning!   Ralph’s fly proved to be a charm for me when on day 4 when I used it to hook and land a beast that tipped the scales at 32 pounds.

By weeks end, 8 anglers tallied 35 permit landed, 5 of which bested the 20 pound mark.  Numerous tarpon, bones and a few snook were landed by the group.  Dr. Ralph’s magic crab fly accounted for 17 of the 35 permit!    I’ll be happy to provide the pattern recipe on request.

On our last morning, the truck arrived with the group from Playa Blanca who’d had similar luck down south in Espiritu Santo scoring numerous grand slams and adding another 21 fly caught permit, to bring the total to 56 permit and 10 Grand Slams landed in 6 days on Punta Pajaros, a new all time record for the island.