Alaska West stands out as one of Alaska’s premier camps, and in a state that abounds with world class fishing camps, that’s saying a lot. The camp sits on the Kanektok River which runs 110 miles from Kagati Lake to the Bering Sea. One of the Kanektok’s true strengths as a fishery is its relatively small size. This is a very “wader friendly” river, and perhaps one Alaska’s best to target king salmon on a fly rod. Many larger rivers require a boat and very heavy gear to target kings. Flyfishing from bank, beach or gravel bar for huge king salmon is a world-class fishing experience that few other lodges can offer.

The Kanektok is considered by many to be Alaska’s best allround river hosting impressive numbers of all the major anadramous and resident species. All five Pacific Salmon species – including king, pink, chum, silver, and sockeye – surge past the Alaska West campsight every summer in huge numbers. Since the camp is less than four miles from the river mouth, these fish are fresh from the sea, bright, well-fed, and tireless fighters. To be sure, many will be very thankful that the camp loans out tackle to replace broken rods; these fish won’t come in easily. Fishermen are taken out in pairs with a guide on an 18 foot, jet-powered skiff each morning. The angler should not be surprised at landing over twenty fish in a day and will get used to having sore arms at dinnertime.

Dolly Varden, grayling, and arctic char are also abundant on the Kanektok, as is the spectacular Leopard Bow. This magnificent strain of rainbow trout, is so nick-named for the dramatic and thorough speckling. Rainbows are abundant to about 26-27 inches in the Kanektok River. 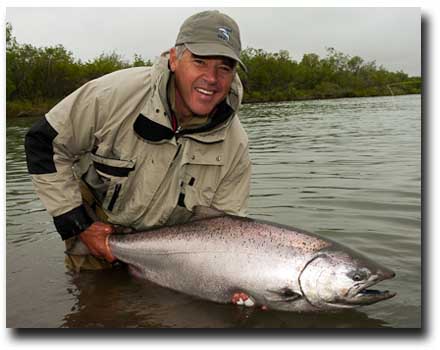 Alaska West’s camp itself is comprised of heated guest tents, shower tent, and a roomy dining tent. All meals are included and are clearly prepared with the hardest working of anglers in mind.The Alaska West Camp is not easy to access. Plan on at least a day and a half of travel to get there. Even from Anchorage, two more single-prop flights, connecting in Bethel, must be taken before arriving at the mouth of the Kanektok. The last leg of the trip is over water, motoring up river to the campsite several miles inland.

This is wilderness fishing at its best; tracking across such a formidable expanse is all part of the experience. Keep in mind that Alaska West owes its abundance of salmon to its location on the extreme outskirts of civilization. Upstream from the camp are miles of flat, uninhabitable scrub, punctuated by thousands of glacial ponds. Dense, weathered thicket extends downstream and dissolves into the Bering Sea.

Despite the sun sometimes shining 22 hours per day, it is cool this far north even in the summer. Bring dependable rain gear and plenty of warm clothing: short sleeves are practical during infrequent periods of morning sunshine; shorts will only take up space in your bag. 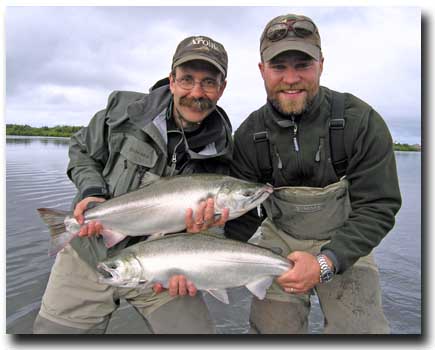 Fishing starts as soon as the boat lands and even the weariest of the maximum eighteen guests will spring for his rod. From this moment on, fishing ceases only briefly for eating and sleeping. Anglers rise early to gobble a quick breakfast, pack a lunch, and pass through the heated wader tent. The first fish are hooked before 8:00am. The rest of the day is spent in pairs, exploring miles of pristine water on small skiffs with jet-powered outboards and one shared guide. These guides have to be truly committed to work in such an isolated spot and are happiest when they are able to show the guest exactly how much the Kanektok has to offer, including a streamside lunch of your freshly caught fish. All flies and leaders are provided to guests at no charge. 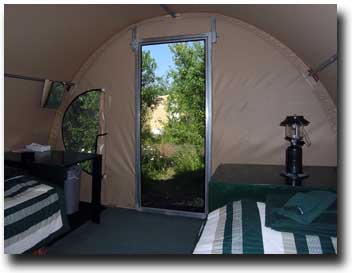 Boats arrive back in camp around 6:00pm with just enough time for fishermen to freshen up in the heated showers and commune in the dining tent. After dinner the true enthusiast has hours of daylight left to work the river on foot. When at last his arm is exhausted, the angler will return to his heated tent with wooden floor, and screened front door. Inside there are two cots with full bedding, a space heater, lamp, plenty of room for standing and for hanging damp equipment, and, thankfully, a mosquito coil. These are simple accommodations but few wakeful hours will be spent within them. The most enthusiastic angler will be put to sleep soundly by these Kanektok salmon.

The 2020 cost for Alaska West ranges between $6,595 per person. The second, third and fourth week of July a special ‘fish with family’ discount is offered. Please call with details.

Included in the rate are: accommodations; meals; soda; flies and lures; a guide/boat for each two anglers; and freezers for storing fish and preparation of fish for shipping.

Not included in the rate are: air fare; fishing license (currently $55)/salmon tag (currently $35); Arolik Days ($100 per person, per day); tackle (except back up tackle if you break a rod), alcohol; tips.