It is worth mentioning here, that the wading opportunities at Andros are far more extensive than many first time guests realize. Ardent waders should be savvy (always ask your guide’s advice), but persistent with the guides about where to wade. We suggest letting the guide decide where to fish based on wind and tide conditions and then look for wading opportunities.

There are hundreds of cays spread throughout the Middle and North Bights, and almost every one is “walkable”, meaning the shoreline is firm. The flat itself may be soft, but you can generally walk the shoreline and cast to fish cruising close to shore. Look for sandy sections of shoreline, as they are easier to walk than mangroves. Some cays are only several hundred yards long and can be covered in minutes. Others are miles long and can take half a day. Not every shoreline is productive throughout the day, but at the proper tide with decent visibility, these shorelines can present a steady parade of bonefish, some of which are huge.

Anglers fishing two to a boat may want to look for these walking opportunities so that both can fish at the same time, one from shore and one from the boat. The person who hops out of the boat should consider him or herself a bit of an explorer, as you may be trodding where few people have ever trod. And, if you tackle many miles of shoreline, you should be physically fit for walking and prepared with sunscreens, bug spray and water bottle. Also be sure to carefully establish a game plan (where and when to meet up with the boat) with your guide and fishing companion. The rest is up to you!

Prevailing NE wind, possibility of “cold” fronts. Best months for big bonefish (which have a greater tolerance for cool water), particularly on windy days. Best conditions for barracuda on the flats. December and March are good months for permit. Tarpon can be found around west side creeks December through March. Few insects.

April, May and June

April is a transition month between Winter and Spring and can be calm or windy. Good months for bigger bonefish and permit. Water temperatures are warming in April and bonefish begin a spawining ritual, exhibited by large schools of “floating bonefish.” Insects (mosquitoes, no see ums and horseflies) start to appear in April and increase in May and June when the winds are usually calmer. Greater chance of rain (usually afternoon showers) in May and June. Good months for sighting tarpon on the flats and creeks.

Calmest winds, except for possible tropical depression, storm or hurricane. Flats can get hot, so best to avoid the middle of the day (guides go on “summer hours”) and fish near the ocean or on the east side. Always a chance of rain, which cools down the flats. Good opportunities for tailing fish early and late in the day. Tarpon should be available.

Except for possibility of hurricane or early cold front, conditions are otherwise optimum. Variable winds, light at times. Good water temperatures. Good chances for big bonefish, which tend to be on the move. November and December are good months to find permit on the flats. Tarpon should also be available.

THE BIGHTS OF ANDROS

There are a myriad of cays, creeks and flats that make up the “Bights of Andros” AIBC is located at the northeastern-most point of the map, on the “East Side”. Bonefish can frequently be seen tailing within 200 yards of the lodge and there are any number of productive flats just 15 minutes by boat from the lodge. Big Wood Cay is a huge cay located between the North and Middle Bights, which by itself offers more bonefishing flats than some Caribbean fishing lodges can claim in total. Some of the best permit flats are also located on the east side of Big Wood Cay, between the cay and the barrier reef. 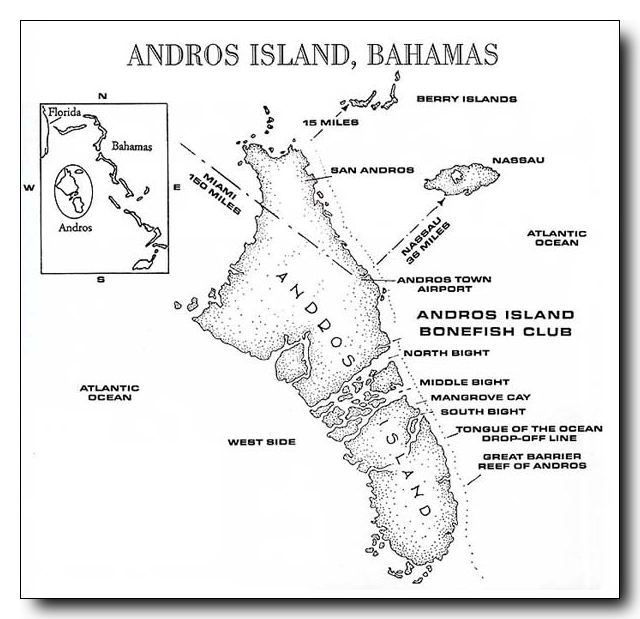 The flats closest to the ocean, such as the flats around Big Wood Cay, White Bight, Young Sound, Moxey Creek and Behring Point are also the best wading flats as they are formed by the break-up of hard corals. In addition to wading the flats, you can walk the beach at Big Wood Cay at the appropriate tide and stalk bonefish from dry land. This technique gives the angler a great deal of mobility, a distinct advantage in keeping up with cruising fish.

As you move into the bights, the bottom gets softer and wading is limited. Bahamian guides are very accustomed to poling the skiff, which they do in a seemingly effortless way for 8 or more hours a day, and this is the preferred style of fishing the interior of the bights. Fishing from a poled skiff allows you to cover more ground than you can on foot and it enables you to pursue large bonefish that frequent flats too deep to wade and have a knack for staying just out of casting range.

There are too many bonefish flats to name or indicate on the map, but the guides know them intimately and some of the titles speak for themselves, like “Land of the Giants”, “Bonefish Boulevard”, “Soft Mud Bight” and “The Promised Land.”

The headwaters of these creeks and the ocean they enter into is called the west side of Andros, where there are no human inhabitants, just endless miles of coastline and flats.