Large, bright salmon begin entering the Restigouche during the month of May. Little is known about these May runs of fish, as up until 11 years ago, the season didn’t open until June 1st. 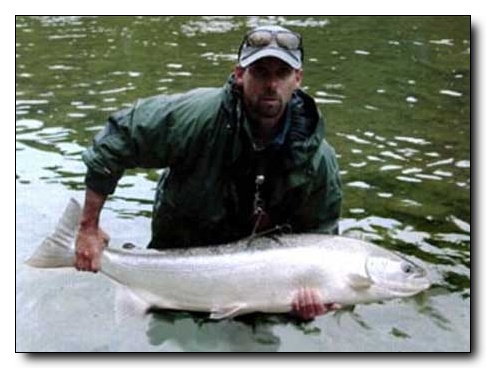 Eleven years ago, New Brunswick, introduced a “spring salmon” (kelt) season, pushing back the traditional June 1st opening day to April 15th. Over these 11 years we’ve had only a few fisherman in camp before June 1st but they were all rewarded with big bright first run fish. Jim Grey, veteran salmon angler and author of The Handbook for the Margaree River was a strong believer in this early run and was anxious to give this a try. In 2000 Jim landed a beautiful dime-bright 38-pounder on May 28th. Of interest, there were 4 other salmon taken prior to Jim’s that May, the first being a 25 pounder taken by a guide on the 20th of May! Since 2000, only a few anglers have fished Red Pine before June 1st. The only one with any regularity has been managing partner, Renato Danese, who typically arrives a few days before the first of June. Over the years, Renato has taken fish between 25 – 38 pounds prior to June 1st, most recently a 30 pounder this past May 30th. These few that we’ve taken have all been beautifully conditioned with deep bodies and small heads. And all have been reported as incredibly strong fighters!

The spring salmon fishermen downstream in Matapedia have been taking increasing numbers of large bright fish along with kelts, not only during the month of May, but several brights have been caught as early as late April. Many times in recent years, the Red Pine guides have watched big bright fish jumping in Home Pool in mid-May, before the camp opened.

All this, supported by documented climate change which has produced warmer and earlier springs in recent years, leads to the logical conclusion that good numbers of big fish are in the river long before the traditional June 1st opening of the season.

To target these early runs, Red Pine will offer the First Run Special, May 17th – 24th, and May 24 – 31st. We are offering these weeks at the deeply discounted rate of $3,000 per person double occupancy plus taxes (total $3,311.25 US per person). Further group discounts will be offered to parties of 6 or more anglers.

We fully expect these weeks will quickly become quite popular with hard-core, trophy salmon anglers. This is an opportunity to get in on the ground floor at nearly half the cost of prime June/July weeks! Call today to make your reservation.