Atlantic Salmon on the Kola & Giant Rainbows on the Kamchatka Peninsulas 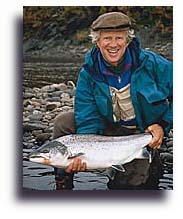 The incredible Ponoi River on Russia’s Kola Peninsula may be the world’s most prolific Atlantic salmon river. During recent years, anglers landed an average of just under 40 salmon per rod per 6-day week for the entire 16-week season! The Ponoi River Company is the longest operating and most reliable outfitter on the Kola. Operating from the centrally located Ryabaga Camp site, anglers access over 50 miles of the Ponoi and an additional 50 miles of tributaries by jet outboard river boats or fly-outs in 2 twin jet helicopters. While known predominantly for fantastic numbers of small salmon (7-10 pounds), one year the Ponoi produced 1411 fish over 10 pounds including two over the 30-pound mark! Space is extremely limited for the season and early reservations are advised. 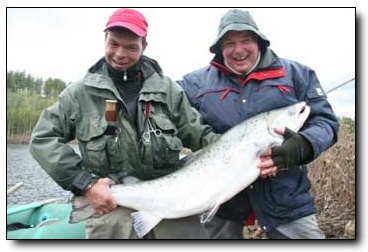 Kola Lodge gives serious Altantic Salmon fishermen the rare opportunity for trophy Atlantic salmon, which can exceed 40 – 45 pounds. On most other trophy salmon rivers, targeting big fish equates to catching few fish. However, the Kola offers not only chances for big fish but impressive daily catches as well.

Guests at the Lodge fish both the Kola and it’s beautiful tributary, the Kitza River. Each of a maximum of 16 anglers (14 in July) fishes with his own boat and guide daily with accommodations in private cabins.

The Wild Salmon Center has gotten all the press, but Ouzel Expeditions pioneered Kamchatka and has outfitted the peninsula since 1991. Owner, Paul Allred concentrates on four rivers and picks the one that’s fishing the best the day you arrive!

Kamchatka has been decribed as, “like Alaska used to be – but better”.   This 750 mile long peninsula boasts hundreds of miles of pristine, wilderness rivers, teeming with 6 species of Pacific salmon, arctic char and kunja (Siberian) char, and perhaps the best rainbow trout fishing on the planet.

Veteran Alaksan outfitters, Paul & Sharon Allred, owners of Ouzel Expeditions , were the first Americans to explore and outfit the Kamchatka and are entering their 15th season providing top quality float trip expeditions on the peninsula.  For anglers looking for the ultimate wilderness experience and the opportunity for catch 30 + inch wild rainbow trout, we recommend a float trip with Ouzel Expeditions . 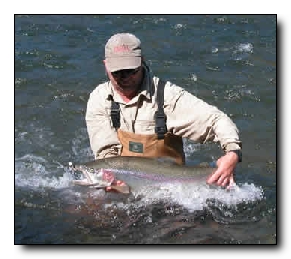