Fly fishing in the Seychelles

Farquhar Atoll is the most southerly atoll in the Seychelles chain of islands lying just over 700km to the southwest of the main island Mahe. This remote atoll has a total area, including the large lagoon, of 170.5 km² which is 18 km north to south and 9 km east to west. The total island land mass is 7.5 km² with a serviced concrete landing strip situated on the most northerly island. The main group of islands form a long curve which describes the eastern side of the atoll. Largest of these are Isle du Nord and Ile du Sud, with the smaller Manaha gaps and islands between them. Further south is Goelette and to the open western side of the atoll lies the small group known as Trois Îles. The large ear-shaped lagoon provides easy access to the countless flats, channels and surf zones which make Farquhar such a diverse fishery. The flats consist of hard white sand, turtle grass and broken coral which make for comfortable wading. Farquhar has a small population of local Seychellois, whose main roles are running a small line-fish operation as well as acting as a skeleton crew which manage the island and service the airstrip.

Farquhar Atoll Lodge is a basic but comfortable guesthouse which caters for ten anglers at one time. Everyone is accommodated in the main lodge which is fully air-conditioned and has five twin en-suite bedrooms and a central lounge. The lodge is equipped with 24 hour 220 volt electricity, air-conditioning and has a constant supply of hot water. There is full housekeeping as well as a daily laundry service available. An undercover dining area on the waters edge with a magnificent view forms an idyllic backdrop for both breakfast and dinner. All meals are served around the outside dining area with the chef preparing a mix of Creole and international food. All mineral water and soft drinks are included in the package price. The lodge has plenty of local beer for sale. Spirits and wine may be pre ordered to insure you have your preferred order. Alternatively you may bring your own bottle of preferred spirits and wine. 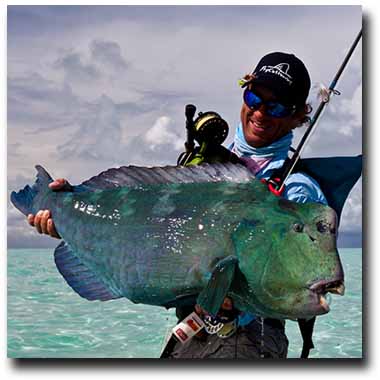 The first part of the season traditionally runs from October to mid December and the second part from late February to mid April, with a break over the festive season. These are the peak periods, as January is one of the rainiest months in the Seychelles. From May to September, the strong south-eastern monsoon winds blow incessantly. These winds bring cold water onto the flats and make fly fishing an unpleasant and unproductive experience.

Typically anglers will be up early and after a quick breakfast head out to the flats to fish the first tide. We generally stay out on the flats for the whole day taking packed lunches with us when we leave the lodge in the morning. There is however an option to return to the lodge for lunch before heading out later that afternoon for the second fishing session. During the midday break anglers can snorkel, or just laze around and re-hydrate in the air-conditioned guesthouse. The following day’s activities and schedule will be planned the night before between the guides and the clients, taking into account the tidal movements and the species anglers wish to target.

Farquhar has over the years provided all fortunate enough to visit her shores the opportunity to fish some of the finest flats the Indian Ocean has to offer. Thanks to the guesthouse on Isle du Nord, Angler Adventures and FlyCastaway now offers anglers from around the globe the opportunity to fish for the wide variety of species which frequent these waters from the comfort of a lodge. Species such as Bonefish, various Trevally species including ferocious trophy sized Giant Trevally, the finicky Indo-Pacific Permit, Triggerfish, Barracuda, Humphead Parrotfish, Napoleon Wrasse, and Milkfish call Farquhar and her rich waters home. The guides will lead you onto the flats and help you identify the desired target species, the areas which they frequent and explain the correct techniques with which to catch them.

Deep water begins very close to shore and it’s possible to fish these waters from the boats. Here the most common species encountered are Giant Trevally, Barracuda, Wahoo, Yellowfin Tuna, Dogtooth Tuna, Grouper, Bohar Snapper and Sailfish. All FlyCastaway guides are experts in rigging, teasing and the handling of blue water fish. 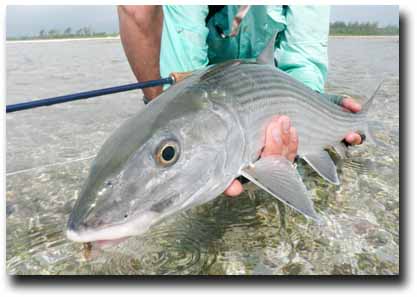 Anglers will be led by a team of five world class professional FlyCastaway guides, all of whom speak English. Each guide is a qualified skipper, has first aid experience and is extremely experienced with regards to all facets of fly fishing the remote saltwater destinations of the Indian Ocean. Their passion and dedication is infectious and rest assured they will definitely go the extra mile in search of your fish of a lifetime. Added to this, each guide has the use of one of our four new tender boats which are ideally designed for accessing the flats as well as allowing us to maximize the fantastic offshore fishing Farquhar has to offer. 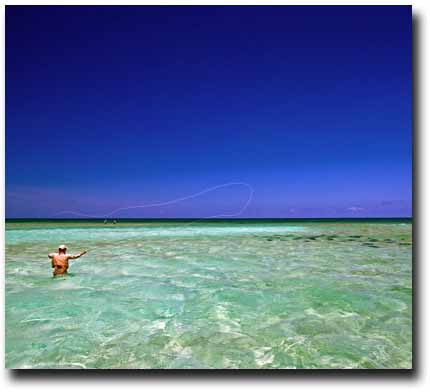 Farquhar Atoll utilizes five brand new 17.3 ft Angler skiffs each of which carries a single 90 HP 2-Stroke Yamaha engine. The boats have been specifically designed and fitted to fish both the flats and offshore waters of the Seychelles in comfort and safety. These Angler boats have a draft of approximately 9 inches allowing us to access some extremely shallow areas of the atolls; however 99% of fishing on Farquhar is done wading the flats. These boats are also sure to make the excellent offshore fishing far more enjoyable and rewarding as all of them are equipped with a fish finder. Other added features include fly rod storage fittings, bimini tops and cushioned seats.

The hard white sand, turtlegrass or coral flats of Farquhar make for easy wading, thus separating it from other destinations in the world. As most of the fishing will be done while wading, good protective footwear is essential. Standard diver’s neoprene booties with a reinforced rubber sole are not appropriate. More protective flats wading boots must be worn. We’ll be happy to recommend appropriate wading boots and we’ll provide each client our “what to bring” list. Guests will not be taken onto the flats without proper footwear!

The 2019 cost for 7-nights/6-days fishing is $9,500 per person based on double occupancy accommodations and a shared boat and guide daily.