At Los Roques it is “business as usual” and that means the flats have been rested and the bonefish are eager! Chip Bates of Angler Adventures traveled to Los Roques in early July 2003 and reports that the political situation in Caracas has stabilized, the economy is regaining strength and the Venezuelan’s are anxious to receive tourists. 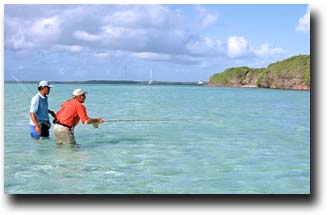 Some things do get better with age, like the bonefishing at Los Roques. This atoll is now a National Park. The numbers of outfitters have been limited, but the bonefish are thriving. Politics kept anglers away last year. Our outfitter, Sight Cast, bats 100% on customer satisfaction. This is an exotic destination for wading flats, a lot closer than Christmas Island or Seychelles. Read about “The Pancakes” on our web site.

From mid January through mid October, Los Roques is one of the great destinations to stalk bonefish on foot. Like Christmas Island, all fishing is done wading. Los Roques is a spectacularly beautiful coral and sand atoll, 80 miles off the Venezuelan north coast. The flats are pristine an loaded with bonefish from small to large, as well as some tarpon and permit. Outfitting is provided by Sight Cast  at Acuarela Lodge.

Few experiences in angling can compare with the savage explosion of a peacock bass striking a top water lure or fly. Guri Lake is Venezuela’s most well-known peacock fishery. Guri’s fish will average 6 – 7 pounds, but double digit fish (up to 20 + pounds) are here as well. Guri is outfitted by Chapi Sportfishing’s Paovon Lodge, located on the southern shore of the lake. We also expect to hear good things from Jacob Elias (former owner of the original Guri Lodge) who is now operating a 65-foot houseboat, the Peacock Princess. Jacob has refurbished his fleet of Ranger bass boats and can now accommodate up to 8 anglers. The Peacock Princess offers the advantage of being able to move “the lodge” to the best fishing throughout the season.

Eleven miles northeast of the beach resort village of Caraballeda, an underwater mountain range rises from depths of 300 – 500 fathoms to peaks within 45 fathoms of the surface.

Deep oceanic currents collide with this structure producing an upwelling from the nutrient rich depths, concentrating the food chain on the surface. The result is one of the world’s greatest fisheries for blue marlin, white marlin and sailfish, known as La Guaira Bank.

While “The Bank” produces all three species year round (and broadbill swordfish in the summer), the most popular seasons are September through November for white marlin, and March – May for best numbers of blues. 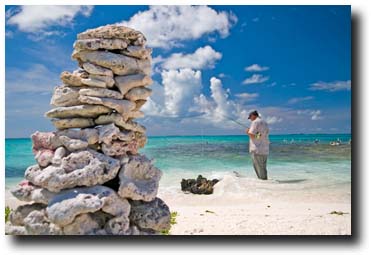 Tacarigua Lagoon near the town of Rio Chico hosts a fantastic baby tarpon fishery. These fish range in size from 3 – 10 pounds and at times (particularly the fall months) tarpon to 50 + pounds are available. This is a fishery well suited to light tackle and fly rodders. It’s not unusual to jump 30, 40 or 50 of these mini-silver kings in a day. Rio Chico makes an interesting side trip following a Los Roques or a billfishing package.