ST. BRANDON’S IS NOW LAND BASED WITH A FASTER CROSSING!

St. Brandon’s Atoll (Cargados Carajos Shoals) is a group of over 50 small islands (total land area of less than 1 square mile), islets, coral ridges and vast sand flats on an extended reef in the Indian Ocean, situated 268 nautical miles north-east of Mauritius. Many anglers have started calling St. Brandon’s Atoll the best bonefishing in terms of numbers and size of the bonefish, anywhere on the planet, and it’s hard to disagree. This fishery is virtually untapped and has unbelievable bonefishing.

The fishing grounds are as remote and untouched as you can find these days. St. Brandon’s atoll is a 268 nautical milesfrom Port Luis, Mauritius, 16 hours on the high speed, wave piercing trimaran “Patrol One” and the only “consistent” human activity on St. Brandon’s is from a small population of Creole natives who live on Raphael Island in the north. In addition, fishing season is extremely short (12 weeks per year: late September – mid December and early April – early June) due St. Brandon’s location in the Cyclone Belt and effects of the winter monsoon winds. 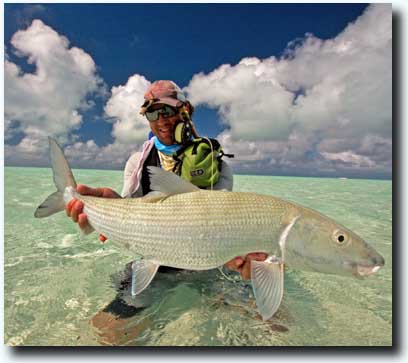 St. Brandon’s is protected by a reef measuring more than 50 km from north to south and 5 km wide, with only two major passes. The fishery itself is extremely diverse, comprised of scattered islands, vast connecting sandbanks and flats of hard white sand, broken coral, and less frequently some Turtle grass flats. In particular, the western side of the atoll’s bottom is comprised mostly of sand and pancake flats, making for some spectacular bonefishing.

The bonefishing is comprised of casting to large schools of 6 – 7 bonefish and double-digit sized in singles or doubles. A massive bonefish of 15lbs was landed on St. Brandon’s, as have a great deal of bones over 10 pounds. St. Brandon’s may be the most productive fishery anywhere for Indo-Pacific permit. There are also a number of Trevally species, including the coveted Giant Trevally (GT) as well as large Bluefin, Golden, Yellow Dot, and Green Dot Trevally consistently available during a week of fishing. GT’s up can break the 100 lb mark, but they’re not always available and always unpredictable.

Almost all of the fishing on St. Brandon’s is done wading. The atoll is mostly comprised of easily waded white sand flats. Although the sand flats are easy on the feet, there are areas with broken coral and other wading hazards, like Stingrays, Stonefish, Cone shells, and Sharks, so the appropriate footwear for wading is a requirement. Anglers are transferred from the Gryphon to the flats on four 17 ft locally built mono-hull tender boats powered by twin 15 HP Yamaha 2-stroke engines. The tender boats draft 8 inches, allowing the guides to access the shallow flats on the western side of the atoll. Fly Castaway’s utilized a guide rotation system, allowing guests to fish with each of the 4 guides on the vessel. Each guide is a qualified skipper, has first aid experience, is experienced guiding fly fishers in the remote fishing destinations of the Indian Ocean and fluent in English. 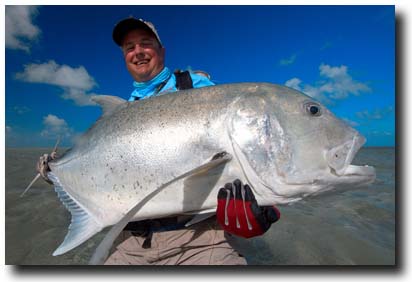 As an example of the fishing at St. Brandon’s Atoll, here is an excerpt from the fishing diary of the head guide:

“TR hooked another Bonefish when roughly 40 GT’s between 130cm & 170cm split into two pods and tore into the shoal of panic stricken Bones which had surrounded us. I instantly broke off TR’s Bonefish and he grabbed his 12wt. TR proceeded to hook two of these monsters with the hooks pulling out on both occasions. Third time lucky I reassured TR. He made a cast at another pod of fish that had moved within range and started stripping. Another monster fish of about 150cm charged in and ate the fly, this time the hook held firm and she steamed off. We jumped into the tender and started chasing the fish. After 35 minutes TR managed to pull the massive creature out of the shoal. She began tiring, rubbing her head against the flat in an effort to get rid of the hook. This was our last chance to land this monstrous creature, as we were about to hit deep water again. But, as if taking off on her initial run the fish ploughed forward for deeper water. The reel’s drag was cranked all the way up and there was nothing more TR could do…..38 minutes into the fight the sound of 80lb braid popping signaled we had been spooled.”

Previous seasons on St Brandon’s were run as a live-aboard mother ship operation onboard MY Gryphon, as foreigners were not permitted by the Mauritian authorities to stay on land. The last 5 years of hard work has finally paid off and we are excited to announce the beginning of a new era in this project, the St Brandon’s land-based experience! The high-speed transport vessel ‘Patrol One’ will ferry guests to and from the atoll. ‘Patrol One’ consistently does the crossing in 16 hours, which allows for 7.5 fishing days on the standard 9 night program. This is a full extra day of fishing at a better price!

Guests will be accommodated in a comfortable guesthouse on Raphael Island, situated in the fish rich northern part of the atoll. Although the guesthouse is by no means luxurious, it is clean, comfortable and considering the remote location, is all a travelling angler needs to enjoy the finest trophy Bonefish, Permit and GT fishing available in the Indian Ocean. To top it off, there is a highly productive, easy wading, flat a short walk from the front porch!

The Patrol One is a 73ft two deck wave piercer trimaran designed to handle rough seas at high speed. A crossing to St Brandon’s on this cutting edge vessel takes between 14 and 16 hours (10 hours less than the MY Gryphon) and roughly between 12 and 14 hours on the way back. It offers a large external cockpit, an adjacent galley, a dinette and a bridge area capable of seating the skipper and seven passengers in aircraft style plus one extra seating arrangement. There are four cabins containing 8 single/bunk beds for those who would prefer to lie down during the crossing.

The 2018 rate for a 9-night/7-day fishing package on St Brandon’s Atoll is $8,000 per angler based on double occupancy accommodations and 2 anglers per guide each day.

Not included in the cost are: International flights; Accommodations on Mauritius; Ground transfers on Mauritius; Tackle & Flies; Gratuities; Wine & Spirits; Medical Evacuation and Travel insurance (This is mandatory as the islands of St Brandon’s are remote); use of Satellite Phone; Personal Expenses.

FlyCastaway’s “mission statement” is based around two key principles: First, taking clients to remote fishing destinations which are in as pristine a state as possible and which offer exceptional fishing and second, using guides which are extremely passionate, knowledgeable and professional, ensuring that clients get the best opportunity to experience the trip of a lifetime.