Beyond the Blue Bonefishing

Turks & Caicos is a fraction of the size of the Bahamas. The island of Mayaguana alone is about half the land mass of Turks & Caicos. But the bonefish population in T&C may actually be denser than the Bahamas! It’s impossible to count, but certainly arguable. There are literally flats everywhere in T&C and some, like the Caicos Bank stretch as far as you can see on the clearest day of the year (75 square miles to be exact).

Whereas bonefish lodges in the Bahamas exist on nearly every of it’s 20 plus major islands and some islands, like Andros, boast more than 20 lodges on one island, there is just one bonefish lodge in all of Turks & Caicos, Beyond the Blue Bonefish Charters in South Caicos. Lots of people have been to Provodenciales, or “Provo”, the hub of tourism in the Turks & Caicos.

Few people have been to South Caicos, and that’s the way Bibo Jayne, the owner of Beyond the Blue Fishing Charters, intends to keep it. A transplanted Floridian, who has seen the effects of development on fishing, Bibo likes to keep a low profile and leave little or no impact on the environment of South Caicos. Despite not being a big promoter, he manages to fill his 6 person lodge for 6-7 months a year. 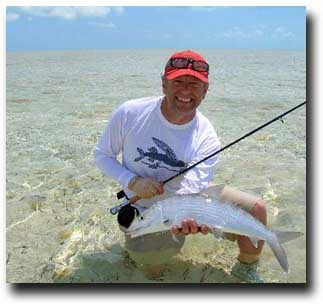 As a result, less than 140 anglers fish South Caicos each year, creating one of the most remarkable ratios of angler per thousand bonefish anywhere short of Christmas Island or Seychelles. The remoteness of South Caicos is most savored when you cover mile upon mile of it’s gorgeous, shallow flats by airboat and never see a “prop scar”. You realize no one else fishes here. It’s all yours. Everything about South Caicos … “south” as it’s called, is different … in a good way.

It’s all wading. There are no skiffs. Your only form of transportation on the water is a 24 foot airboat powered by a 454 Chevy engine or one of 4 paddleboards, highly effective and custom outfitted for cruising the flats. Despite the fact that the bonefish can be ridiculously plentiful at times, are aggressive, and relatively easy to catch, this is not a destination for beginner bonefishermen. There is no one on one guiding. Once the airboat stops, the 6 anglers wade the flats. The airboat operator (either Bibo or Ganger) will drag the boat to stay with the anglers, or if you spread out, he eventually rounds everyone up when it’s time to hit a new flat. You must enjoy wading and spotting bonefish on your own.

The rewards are, you will have the chance to catch both numbers and size. Bonefish schools numbering in the 100’s are a common sight. So are 5-10 pound fish traveling in smaller pods, or hanging on the edges of the big schools. It’s best to tighten your drag and rely on heavier tippet than you might otherwise, to be able to hang onto the big boys, which can appear out of nowhere, anytime.

The other thing that’s different is the way they locate fish in South. Most of the time fish are spotted from the perch of the airboat at 25 mph. Stop. Get out and fish. Amazing. If you’re able to spot the fish soon enough that you don’t run them down, they’re not permanently spooked by the sound of the airboat. Even though the big Chevy cranks out big noise (head phones are provided), the noise is generated above the water, not in the water, and the noise doesn’t spook the fish as much as you might expect. 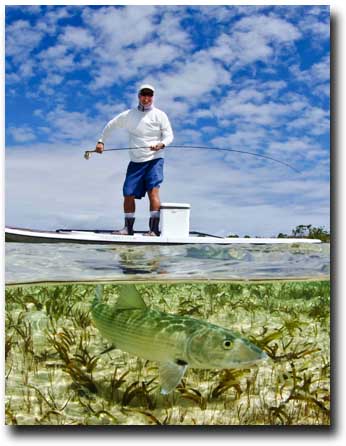 Why use an airboat?

Because the flats are too shallow, except at the higher tides, to access with a traditional outboard engine, tunnel hull, jack plate or whatever. Finding fish on these wide open flats is a bit random. You might see 1,000 fish on a flat one day and zero the next. That’s when you get in the airboat and go searching. There are mangroves and like everywhere, the fish like to feed in the mangroves at high tide. The bottoms get softer the farther you penetrate the mangroves. But, mangroves have creeks and openings that make them fishabale, and the paddleboards are perfect for penetrating the mangroves at higher tides and they allow you to cover many times more habitat than you will on foot.

“We leave the beach about 8 AM and head for the flats. We are in the beginning of the flat system in as little as 5 – 10 minutes. As we traverse the flats, we scan for fish. When we start to see them, we stop the boat and begin to wade the area. As you wade and catch fish, the guide will periodically walk back and bring the boat up so it is usually within a short walk for anglers. We have lunch on the boat and return from fishing about 4PM. By wading, everyone fishes the whole day! Not like the traditional poled skiff where you really only handle a rod for half the time as you share the deck with another angler. We take groups of up to 6 so there is plenty of space on the boat. The South Caicos flat system is huge so you don’t have to compete for space as you wade.

Unlike some bonefishing locations, there are plenty of flats that don’t get “milky” in a persistent, strong wind. That’s because the majority of the bottom is hard sand, not soft sand. Line control can be a hassle when fishing from a boat in windy conditions. But, wind becomes advantageous when wading, as long as you can fish downwind with the sun behind your back. Wind settles the fish and allows you to get closer without spooking them. And Bibo insists that the fishing in South Caicos is better when the wind blows hard! Here’s how he describes it: “Just an FYI, when your clients ask about the wind. It doesn’t usually impair the casting as you can adjust to the fish when wading. When the wind is ripping, the fish are unbelievable. They flood onto the bank. We just had guests here during a stretch of 20-25 knot winds and here’s an email they sent me after their trip.” 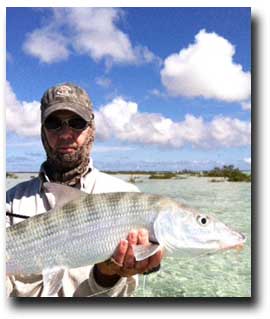 “Ganger put us on fish early the first day and it was crazy good for 3 straight days. I think the wind was our friend! The vast majority of fish were cruising in ankle deep water in singles, doubles, and up to 5 or 6 in a group. The average fish was 4 – 6 pounds and we caught many in the 7 – 9 pound range, Ganger will probably agree that Doug and I caught over 100 fish each (I quit counting!! Great trip”.

“By far the best bonefishing of my life”. Charlie M

“Last day was great. Lot of fish. I broke one off that was closer to 20 than 10 lbs. Have never seen one even close to that big. Eye was the size of a ping pong ball and he took the fly at my rod tip. Grrr”. Mike R.

“I’ve never been to the same place twice. This is my 4th trip to South Caicos. This is a very special place. My question was, is it possible to stop the airboat after seeing fish and catch fish. We did it 3 times the first day. Now with the paddleboards, you have 10 times the range you have on foot”. M. Hatter

Beyond the Blue is open from November through June. For those who love to wade, this is a “must visit” place.

Bibo and Marian Jayne are partners with Ganger Lockhart, a native of South Caicos. Bibo and Ganger met years ago, when they both worked at the School for Field Studies in Cockburn Harbour, South Caicos. Bibo imported an airboat from Florida to explore the shallow flats and what he found was unbelievable numbers of bonefish. In 1999 they started Beyond the Blue Bonefish Charters and began housing guests. 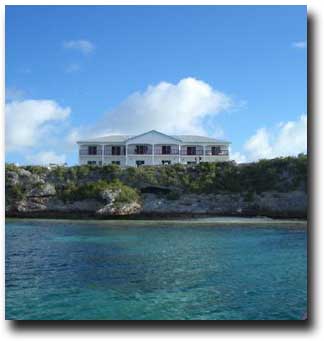 Beyond the Blue leases three townhouses high on a bluff, near Tucker Point, overlooking the Atlantic Ocean. There is a swimming pool built into the rock shoreline. The view is spectacular. Next door are additional accommodations, pool table and bar. Beyond the Blue takes a maximum of 6 anglers a week. The lodge is appropriate for fishing couples, but there is very little to do for non-anglers.

Each townhouse has two double bedrooms with two twin beds and a private bath. Nothing fancy, but clean, functional, great hot water showers and air conditioning in the bedrooms. There is also a kitchen, refrigerator and common living space.

Meals are served in the dining room of the middle townhouse. The food is prepared on site by a local chef and consists of tasty local, Bahamian dishes, such as pork, chicken, beef, conch, lobster and fish. Breakfast and lunches are also prepared by the chef. Sandwiches, sodas and waters are carried in the cooler for each day.

Angler Adventures can advise you on the best schedule. Flight time is 35 minutes. The cost (subject to change) is approximately $180, round trip.

Our Services are Free!
Beyond the Blue Bonefishing 2020 Rates
(subject to change)