The Malleo River is considered by many trout fisherman to be an almost perfect trout stream. The Malleo is a moderate size freestone river comprised of diverse water, from boulder strewn runs through hip-deep water to classic pools tailing out into riffles to stretches of under-cut banks shaded by overhanging willows. The majority of the Malleo is easily waded over its 50-mile course from Lago Tromen until it joins the Rio Alumine.

The Malleo River originates at an elevation of 3,821 feet in the Eastern Andes as a small freestone stream. The wading can be difficult on the upper reaches of Malleo and the fishing is typically in small riffles and pools. The Malleo gets very little fishing pressure in this area, mostly due to the difficult wading and challenging fishing. Rainbow Trout are the predominant species in this part of the river and they’re typically abundant to 16-inches with some fish into the 20-inch range, especially in the early season.

As the Malleo approaches the property of the Estancia San Huberto, the river changes it’s course from a freestone river to a variety of water – fast runs through basalt canyons, long slow pools meandering through meadows, traditional freestone riffle and pools, and spring creek like runs. Here the Malleo passes through the 25,000-acre Estancia San Huberto where guests of the hosteria have private access to nearly 20 miles of prime trout habitat. This section of the Malleo has an incredible population of mature Rainbow and Brown Trout (including some large browns up to 8 pounds). The adult trout population has flourished due to San Huberto’s strict catch and release policy that has been diligently enforced. Here, the Malleo is also known for some of the best and most predictable mayfly, caddis and stonefly hatches in South America. 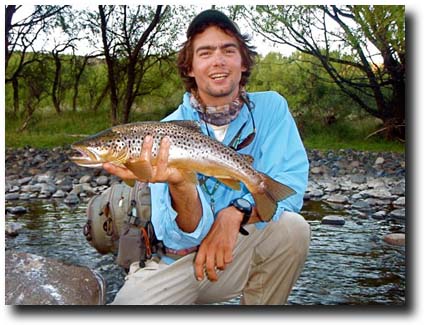 The best way to experience the fishing on the Malleo is with an experienced Fly Fishing Andes guide staying at Hosteria San Huberto. San Huberto is a classic guesthouse located on a large cattle-farming ranch, just North of San Martin del los Andes and on the banks of the Malleo River. The first San Huberto guesthouse was built 1970’s to accommodate a growing number of travelers passing through this section of Patagonia. San Huberto is now considered the most distinguished fishing lodge in northern Patagonia due to the Hosterias long tradition of hospitality and the excellent access the Malleo. 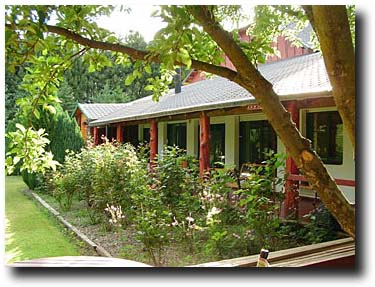 San Huberto can accommodate a maximum of 16 guests, however prefers to limit the number of anglers to 12 per week. The Hosteria is set up for both single and double occupancy rooms, as well as having rooms set up to accommodate guests with physical disabilities. Each room has direct dial phone service for domestic and international phone calls and the lodge offers guests use of their satellite internet connection that can be accessed in the lodge and in the offices. San Huberto is a pleasant, relaxed, informal hosteria with large, bright living rooms that have been carefully decorated and designed for comfort.

Alumine, the river slows considerably and large calm pools become abundant. The landscape surrounding the lower Malleo is more arid and barer than upper reaches. The trout are typically smaller in the section of river, averaging between 8 – 12 inches, however there may be opportunities to for browns up to 8 pounds near the junction pools and during the spawing run. The section of the Malleo below Estancia San Huberto is open to the public, but is is not the best water. The best water is the private water, owned by the Olsen family who operate San Huberto. To Fish the private waters, you must stay at Hosteria San Huberto.

Included in the rate: Pick up and return to Chapelco Airport in San Martin; daily guided fishing; accommodations; all meals, wine and non-alcoholic drinks during meals, open bar with assorted national liquor and beverages, use of the lodge’s private access waters, internet access; fishing license and taxes.