Dave Duncan & Sons Outfitters is unquestionably among the best and most experienced tent camp and float trip operators in Alaska. Dave Duncan’s success is due to the hard work of his five capable sons and the fact that Dave Duncan has made his stake on the river that many experts consider to be the single best river in Alaska (many say the single best sportfishing river in the world!) – The Kanektok.

Located some 400 miles southwest of Anchorage near the village of Quinhagak in the majestic Togiak National Wildlife Refuge, the Kanektok River is so “hot”, that early in his career Dave Duncan attempted to protect it by use of a pseudonym, the “Chosen River”. We first fished with the Duncans over 20 years ago, and for years we carried on Dave’s tradition referring to it as “The Chosen River”. In more recent years, authorities have limited the number of outfitters allowed to operate within the Refuge, placing this exceptional fishery in the qualified hands of a few conservation minded outfitters, like Dave Duncan. The ‘Tok as she’s now fondly referred to has developed such a reputation; even Dave calls it by its proper name these days! 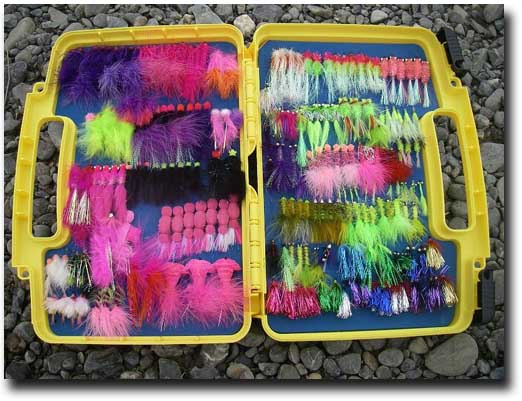 What makes the Kanektok so desirable are: 1) it has incredible numbers of fish; 2) the great variety of species (enumerated below); 3) its size – a relatively small wadable river, perfect for light tackle and fly fishing, and 4) its diverse character – its lower reaches (where it enters the Bering Sea) seeing ocean bright salmon ushered in on each tide, and its upper reaches branching into more intimate, typical trout water.

The diversity of species abundant on the Kanektok include deep bodied, heavily spotted “leopard” rainbow trout, arctic char, Dolly Varden (and sea-run Dolly Varden), grayling, pike and all five species of Pacific salmon – kings, sockeyes, chums,pinks and silvers. Each species can be caught in impressive numbers.

Millions of salmon smolts leave the Kanektok each year to begin the salt-water phase of their anadromous life cycle. Rapidly growing to large size on the bounty of the sea, they return to

sustain their species, dying shortly after spawning. Their remarkable life cycle also sustains the healthy resident population of rainbows, grayling, char and Dolly Varden that feed not only on “fellow residents” such as insects and mice, but gorge themselves on salmon eggs, salmon fry and parr and even the flesh of post spawning dead salmon washing downriver. This near perfect example of nature’s self-perpetuating food chain results in one of the greatest sport fishing rivers in the world. 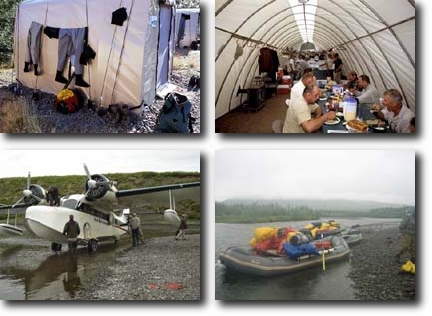 Dave Duncan & Sons operates two base camps on the Kanektok; Upper Base Camp and Lower Base Camp. Central to both camps are the spacious kitchen and dining facilities housed in large, free-standing community area tents, which every evening become the center of activity. These contain a complete propane kitchen, dining tables, and a fly-tying bench. Sleeping facilities at both Upper and Lower Base Camps are sturdy, double occupancy 10 X 12 Weather Port System tents with cots and carpeting. The meals served are excellent and come with homemade bread, fresh salads, and large cuts of quality meats. The base camps even have a hot shower facility as well as heated drying tents for waders and wet clothing.

Dave Duncan & Sons use 17ft Willie boats at Lower Camp. Featuring a wide, 90-inch beam, these provide a very stable casting platform when fishing from the boat. They are also designed to row like drift boats when floating downriver casting to the banks for Rainbows. The Upper Camp, employs 18ft. Jet Sleds, which can navigate in skinnier water.

Both base camps are limited to 12 guests with one guide and two guests per boat. The camps operate Saturday to Saturday (8 Days/7 Nights). Guests fly from Anchorage to Bethel to connect with the Grant Aviaton flight to Quinhagak where anglers are met transferred by boat upriver to camp. 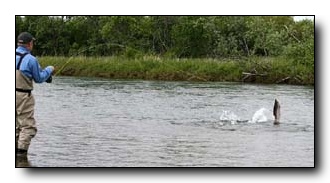 While both camps offer opportunities for all above species, anglers preferring to concentrate on salmon fishing usually choose Lower Base Camp to catch dime-bright salmon fresh from the salt. Fresh run fish are in prime condition and readily take the fly. While kings usually require wet fly, sinking line presentations, other salmon species (silvers in particular) can be teased into surface strikes with patterns like the now famous ‘Wog (Pink Pollywog).

Anglers preferring to concentrate on trophy rainbow fishing usually opt for Upper Base Camp to focus on the more diverse and intimate “trout water”. The rainbows on the Kanektok readily take “the mouse fly”, which makes for exciting surface (“dry fly”) fishing. 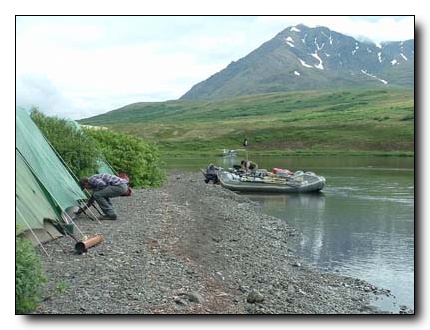 These Alaska adventures are complete wilderness experiences, with no facilities of any kind found along the route. Dave Duncan & Sons has spent years researching and developing specialized camps and boats for comfort and convenience. Only the best inflatable rafts, 16′ Avon Pro’s are used. Each raft features rowing racks, floorboards to stand on, and anchoring capabilities that allow guests to fish any drift in the river. Most of Alaska’s big game and bird species are common in these areas and during the trip it will be possible to see many in their natural habitat.

The sleeping tents all have stand-up headroom and provide good shelter from any weather. There is also a large, central kitchen/dining room tent. The menu rivals most lodges with meals unheard of in a wilderness situation. And, if the above amenities aren’t enough, try their now famous riverside hot showers!

The mobility of these specially designed boats and tent camps allows guests to fish waters inaccessible by any other means. You cover 90 miles from Kugati Lake to Quinagak and encounter multiple runs of the various species as you make your way downriver. These outings were conceived for the fishing enthusiast who wants the ultimate in fishing and outdoor experience. Float trips require a little greater participation and group effort in daily camp operation by the fishing enthusiast and in return it offers a chance to see and fish country that can’t be reached any other way.

You will be flown by chartered amphibian airplane to an isolated wilderness lake surrounded by stately mountains, located at the headwaters of the Kanektok. This is the beginning of a remarkable adventure on a small river. The river continually grows in size and changes in character as it flows from the mountains, through the foothills and finally merges with the sea. 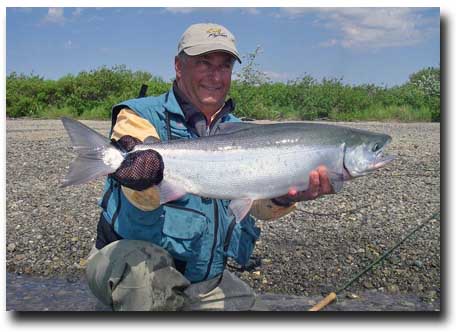 When it’s time to load the plane and return, the person going home is a different person than the one that came. He has a deeper appreciation and respect for the fishing experience and Alaska’s vast wilderness. Float trips are limited to eight guests, with one guide and two guests per boat.

If there is a word of caution, it involves the selection of a “Base Camp” or “Float Trip” over a fly-out lodge. When you select a camp or float with an outfitter such as Dave Duncan and Sons, you are electing to fish one river. Fishing a variety of rivers is not an option as it is at a fly-out lodge. On the other hand, Base Camps cost significantly less than fly-out lodges, and the Kanektok is as productive a river as you’ll find in Alaska. 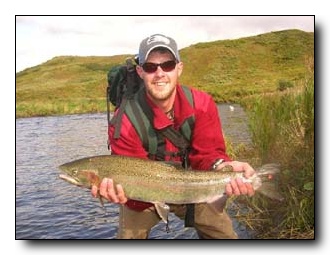 If you’re looking for the greatest variety, we suggest the late June/July time period, when you can catch sockeyes, chums, pinks and king salmon in addition to the fresh water species – char, Dolly Varden, grayling, pike and rainbow trout. If you’re interested in silver and pink salmon (in addition to the fresh water species), we recommend the month of August. If your primary interest is rainbow trout and char, we recommend early June, the middle of the season (mid-July to mid-August) and the first two weeks of September, although rainbows and char are plentiful all season long!

2021 Dave Duncan & Sons – Season Pricing
(Price are per person, airfare not included and prices are subject to change)

Included in the cost are: transportation to and from Quinhagak; lodging, meals, a boat and guide for each two anglers.

Not included in the cost are: air fare to Quinhagak, fishing license ($70 pp/week, subject to change), personal gear, fishing equipment (flies and lures are sold at the camp), sleeping bag and gratuities (suggested guideline is $400 – $500 per person/week). 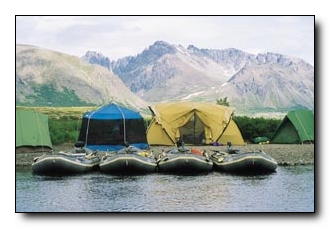 Angler Adventures has considerable experience arranging trips to Alaska. We obtain the lowest airfare from any major U.S. city and we are familiar with the seasonal flights within Alaska, such as from Anchorage to Bethel and Bethel to Quinhagak. We would be happy to make your airline and hotel reservations on your way to and returning from Dave Duncan & Sons.

We are also knowledgeable about tackle and techniques for fishing in Alaska. After making a reservation, we will send a complete listing of what to bring, and we are always available to consult with you over the phone. Please call with any questions. We look forward to hearing from you.