This is the lodge for anglers looking to catch large Brown and Rainbow Trout on some of the most remote water in Chile. El Patagon is located on the banks of the Rio Figueroa and the Lago Rosselot, hundreds of miles from the nearest city. The setting is the lushest portion of a temperate rain forest, reminiscent of virgin old growth forests of the Olympic Peninsula in Washington State. First settled in the early 1950’s, roads didn’t reach the area until 1988. This part of Chile is still un-traveled, except for a handful of Fly-Fisherman “in the know”.

El Patagon’s home river, Rio Figueroa, empties into Lago Rosselot. The Rio Rosselot flows from the lake, heading west, and joins the Rio Palena at the town of La Junta. The Lago Verde, and a host of other river systems, cross the Andes from Argentina to the east and feed the Rio Figueroa. El Patagon has a mile of frontage on Lago Rosselot, miles of frontage on the Figueroa, as well as their own spring creek and other small streams and lakes surround the lodge. Each of these rivers, streams and lakes are home to rainbow, brown and brook trout. There are also seasonal runs of sea run browns, coho, king and Atlantic salmon that frequent these waters. 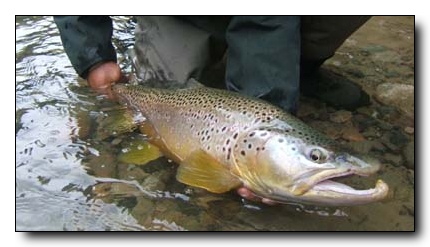 In the early 1990’s there were persistent rumors about fantastic fishing in the most remote areas of Southern Chile. Eventually, reliable sources led to a floatplane pilot and fly fishing enthusiast who created numerous maps with his “secret” fishing locations. In 1995, explorations of the area and the fishery began and the stories regarding the fishery proved to be true. The ideal property for El Patagon was purchased from a local homesteader and work on the lodge began. As a testament to El Patagon’s remote setting, all the materials for the lodge were brought to the property by teams of Oxen and Oxen carts.

The resident brown and rainbow trout in this area range in size with the largest fish reaching 30 inches. An average

fish would run 15 – 18 inches, with good numbers of 20 – 25 inch fish. El Patagon’s home river, the Figueroa, is big water and consistently produces the biggest fish (over 25 inches). These large trout are usually caught on very large dry flies, like Chernobyl ants, that imitate the 4 – 5 inch Cantaria beetle, which is common in this region. Mice patterns skitterd along the surface also bring up big trout, as do Wooly Buggers on sinking lines. 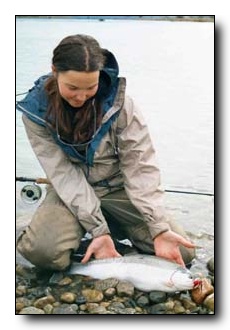 The rivers and lakes that surround El Patagon do have some good hatches of mayflies, caddis and some stoneflies. Particularly, when the weather is warm and dry, each body of water can produce consistent dry fly action.

The fishing season at El Patagon begins in the month of December and continues through the middle of April. El Patagon Lodge opens its season at the end of the spring salmon, silvers, kings, steelhead and sea-run brown trout runs that began in October. Salmon and Sea Run Trout enter the river system from the lower Rio Palena, through Rio Rosselot and Lago Rosselot and the Rio Figueroa while on their way to their distant spawning grounds in Argentina. Some anglers come to El Patagon to specifically target these big anadramous fish, however it is more common for early season anglers to hook one incidentally while fishing for large, native browns that call these rivers home. Either way, hooking one of these sea-fresh fish will change the tempo of your entire day. 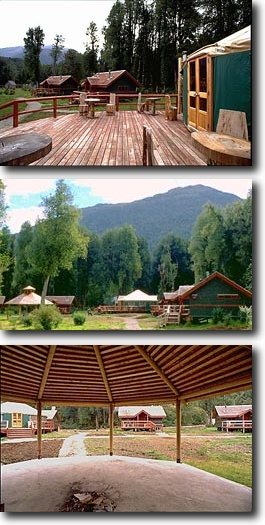 El Patagon has partnered with Mission Lodge and Alaska West, two of the top Alaska lodges, to employ North American guides in the winter months. This has provided El Patagon with an outstanding “guide pool”. In addition, El Patagon has invested heavily in the quality and variety of its boats and equipment, including rafts, jet boats and boats specially designed to access hard to reach locations.

The beauty, serenity and remoteness of the area is truly unique. It is a wilderness area with very little infrastructure. It is highly unlikely you will see another angler on any of the

waters fished by El Patagon. The 4,000-acre property is an excellent base of operations, with both lake and river front areas for anglers to explore and only a few paces from each of the guest cabins is El Patagon’s home river, the Rio Figueroa.

El Patagon was designed to comfortably accommodate eight guests. There are four separate guest cabins set to accommodate two guests. Each cabin has a full bath with shower, built-in closets and a wood-burning stove. For guests who would like a more rustic atmosphere there are kerosene lanterns available, which may be used in lieu of electricity.

In the middle of the compound is the common area and a fogon. A fogon is an eight-sided structure and fireplace, typical in Chile. El Patagon uses it some evenings when lamb al parilla or some other grilled meat is the main course and many guest gather here to swap fishing stories as well. The dining room and lounge at El Patagon is located in a 30-foot diameter yurt, a traditional structure to Mongolia. The compound is constructed in a rustic, local style and reflects the character of the remote region and the temperate rainforest, which surrounds the lodge. The visual juxtaposition of the traditional central Asian Yurt, with the classical Chilean fogon creates an interesting view into two separate worlds. 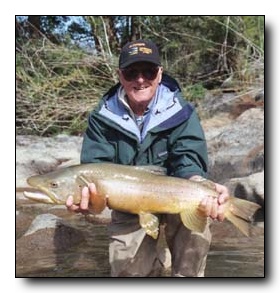 While excellent fishing is focal point, El Patagon also makes sure that guests have everything they require when they are off the river and not fishing. Guests really love some time in the wood fired sauna or hot tub overlooking the Figuroa River after a day of fishing. Just below the hot tub is a cold stream to compliment the sauna and hot tub.

El Patagon also provides guests with their own gear storage locker. Anglers may change into and out of their fishing clothes here and avoid keeping their fishing gear and clothes in their cabin. This room also serves as a drying room for your boots and waders at day’s end. To ensure guests comfort, El Patagon has included convenient restroom facilities in this building.

The beauty of this location is equal to the excellent fishing. El Patagon guides will escort and guide anglers on variety of water, with the possibility of targeting many different types of fish. Guests can literally choose a different type of water and a different style of fishing each and everyday. The possibilities are only limited by the amount of time you have to spend at El Patagon.