Fjordland Lodge is a very special lodge tucked away on the road to Milford Sound. Built on an elevated terrace of log construction, it was the dream of long time New Zealand residents Ron and Robynne Peacock. With commanding views of Lake Te Anau, and the southern Alps, the setting is rural with rolling grasslands surrounding the lodge. Fjordland offfers the opportunity to relax, after that magnificent fly fishing experience or Milford Trek experience, in the big leather chairs while the staff brings you refreshments and you ponder the activities for your next day of adventure.

Lake Te Anau is a ten minute walk from Fjordland Lodge. Across the lake to the west lie the majestic mountains of Fjordland National Park, an area of over three million acres of untouched wilderness, which is part of the much larger South West New Zealand World Heritage area. Te Anau is the gatewy to Milford and Doubtful Sounds and the Kepler and Murchison mountains. Fjordland Lodge owns and operates Fjordland Guides that offers trekking and hikes, birdwatching excurstions, and of course most important of all Fishing trips. The Fjordland region is world renowned for it’s fly fishing, in particular rainbow and brown trout in the well stocked local rivers and streams. 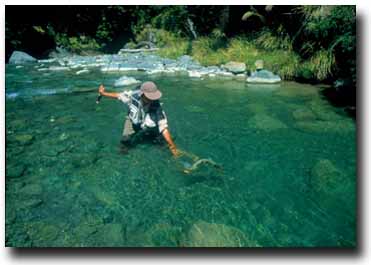 Fjordland’s Ron Peacock is no stranger to the outdoors, having been a National Park Ranger with the Department of Conservation for twenty-five years and a nature guide and fishing guide for the last ten years. His knowledge of this area is world reknown and unsurpassed. He will fill you in on it’s history, flora, fauna, myths and legends. Ron is a professional fishing guide and Fjordland has access to 40 rivers and streams all within one and half hours travel to the lodge. Fishing packages are a big part of the many features offered at Fjordland Lodge. All fishing is catch and release, a policy strictly adhered to in order to conserve the fishery.

Fjordland has some of the finest and most unique fly fishing rivers in New Zealand. There are over 40 rivers and streams within 1 hour 30 minutes of Fjordland Lodge.

The Eglinton is one of New Zealand’s premier fly-fishing rivers. The impressive amount of easily accessable water available within this magnificent setting makes this one of Fjordland’s highest-ranking rivers. The river varies in character throughout its length to Lake Te Anau. Of a generally loosely meandering nature, it is also confined in places by gorges and ancient tributary fans. Bed material varies from quite loose gravels to boulders and solid bedrock.

The Eglinton is dominated by brown trout, although the more active rainbow plays a major role in the river’s tremendous fishery.
The clarity of the Eglinton’s water is very high, so the angler needs to be extremely careful. Polaroid glasses are essential.

The Oreti River flows out of the Eyre Mountains wilderness area and is famous for its large brown trout, which are fewer in number, but can weigh over 10lbs. The Oreti is a river where local knowledge and the expertise of your guide is essential. The upper reaches are very strictly regulated with foot access only and helicopters are strictly forbidden to fly over or land.

The Aparima River rises in the Takitimu Mountains. Initially it flows east but changes to a southerly flow over farmland south of Mossburn, after it is joined by Hamilton Burn and Braxton Burn. Fish feed in the edge of fast water and at the base of ripples. The middle of the day is best for fly fishing and the river has a good number of brown trout of 1-2kg in size, with the occasional fish up to 4.5 kg. 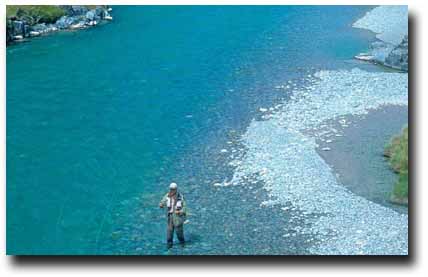 The Mataura is the second largest river in the region. It begins south of Lake Wakatipu, travels south-east to Gore, then turns south again before emptying into Toestoes Bay at Fortrose, near Invercargill. Regarded by many as New Zealand’s top dry fly water, the Mataura is a premier fishery offering over 150kms of fishable water. 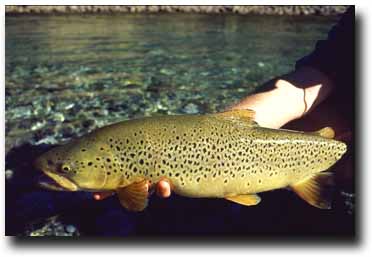 The Upukerora is a small attractive stream that flows over a gravel and stone bed and is an important spawning river for Lake Te Anau . In the lower reaches it holds mostly rainbow trout with a lower number of brown trout in the upper reaches. Despite its proximity to Te Anau town with its easy access, it is a relatively un-fished water that can provide several kilometres of wonderful fly water for those who enjoy the challenge of fishing small streams.

Hamilton Burn rises in the Takitimu Hills and flows south east to join the Aparima south of Mossburn. The Hamilton is mostly slow flowing waters between banks lined with willow and broom. Fish tend to cruise the pools looking for food or to station themsleves along the foam feedlines.

The Mararoa River is a fast flowing medium-sized river that has a very good stock of brown and rainbow trout. It has several distincly different types of water along its length, so if offers something for all anglers and skill levels. A very attractive medium sized water to fish.

Milford Sound is today frequently referred to as the “Eighth Natural Wonder of the World” and is by far the best known of all of the fjords and the only one that can be accessed by road. Daily from Fjordland Lodge guided trips into Milford Sound depart and this is a very popular option for your Milford experience. Explore spectacular alpine scenery along the Milford road, then once at Milford Sound board Real Journey’s new and modern small- vessel “MV Sinbad”. Passenger numbers are strictly limited to ensure a high quality personalised experience, and attentive service. Comfortable coaches with unrestricted views from every seat. Enjoy an informative commentary and numerous photographic stops as you drive on one of the world’s most impressive alpine scenic roads. 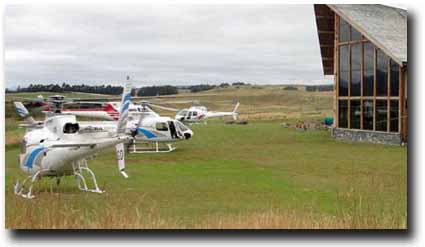 Departs from the lodge helipad and follow the shores of Lake Te Anau to make the first landing at Mt Skelmorlie. This is a picturesque area that looks down on the famous Milford Track and Clinton Valley. Airborne again we overfly the remote Wick Mountains and rugged landscape such as Lake Iceburg, so called because it grows Iceburgs! Views of Mitre Peak and Milford Sound unfold as we circuit the fjord to follow the Milford Track, flying over the McKinnon Pass before landing at the Sutherland Falls. The rugged beauty of the Fjordland National Park will unfold before your eyes as you enjoy this helicopter trip with Southern Lakes Helicopters. Returning to Te Anau is a descent back to reality.

Wilderness Cruise’s also operate daily. Sometimes called ‘the Sound of Silence’, for this trip you cruise across beautiful Lake Manapouri, take a scenic coach trip across the Wilmot Pass, and then cruise 2½ hours on Doubtful Sound. New Zealand Fur Seals and Fjordland Crested Penguins can be seen on many of the small islets at the entrance of the fjord. Doubtful Sound is a massive wilderness area of rugged peaks, rainforest and twisting, hidden fjords.

(All rates are subject to change)