Belize River Lodge is located on the banks of the Belize River, about 3.5 miles from the mouth. The lodge is secluded in the jungle lined western banks of the river and the location allows anglers access to a wide variety of fishing in the river for large migratory Tarpon, juvenile Tarpon, and Snook as well as flats fishing for Permit, Tarpon, and Bonefish. In addition, Belize River Lodge is located only 15 minutes from the international airport, making it one of the most convenient fishing options in Belize.

Belize River Lodge can accommodate a total of 16 guests in a four bedroom “Guest House”, a two bedroom “Cottage”, or a two bedroom “Bungalow”. The accommodations are constructed of native mahogany and surrounded by tropical greenery and exotic flowers. Each room has a ceiling fan and its own bath and hot shower. All rooms have air conditioning. All of the buildings, including the dining room / living area, are within 50 feet of the river. The lodge buildings are decorated in tropical Belizean ambiance and have an appealing old world charm.

Outstanding seafood and native dishes are served. Owner Mike Heusner, managed the lodge when it was known as Keller’s Caribbean Sports, before purchasing and renaming the property to Belize River Lodge in January 1987. He and his associate, Marguerite Miles, are a very competent management team, Mike as a fishing outfitter and Marguerite as hostess and chef.

The fishing in the Belize River, and on the nearby saltwater flats, is done from sturdy 18 foot pangas (skiffs) guided by experienced, English-speaking native Belize guides. However, there is a good amount of wading on some of the saltwater flats. The mangrove lined rivers, which at times can teem with spawning tarpon and snook, that are fished from the lodge include: the Belize River, Black Creek, Sibun River, Manatee River, and numerous creeks and lagoons in between.

Moving into saltwater, the mouth of the Belize River can be a hot spot for big Tarpon. And, the flats almong the coastline and nearby cays offer sight fishing for bonefish, permit, tarpon and snook. Other available species include cubera, snapper, jacks, barracuda, grouper and more. Many species of birds and other wildlife such as manatees, howler monkeys, iguanas, turtles, snakes and occasionally crocodiles may be seen while fishing from the lodge.

Belize River Lodge also offers a remote Outpost Camp on Long Caye and a live aboard vessel as exciting options that extend beyond just staying at the lodge.

Long Caye – The Outpost camp on Long Caye is situated right in the middle of some of Belize’s most fertile fishing grounds, giving anglers access to productive fishing areas like St. George’s Caye or Miami Beach less than 10 minutes. In fact, the Long Caye area is well known for producing good numbers of Grand Slams (catching a Tarpon, Permit and Bonefish in the same day). The Outpost Camp can accommodate up to 6 anglers in 3-double occupancy rooms and is equipped with a shared bathroom, a full veranda, ceiling fans, generator power, and a private island, only shared with your guides and Belize River Lodge staff. 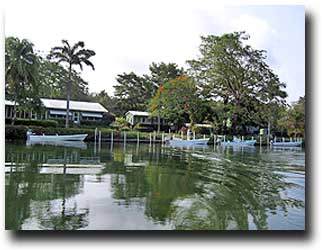 Since the guides do not go home each night, the fishing hours are unlimited. Get up at daybreak, fish, come back for breakfast, fish, snorkel, have lunch. Fish, siesta, have dinner. Then fish until dark or after dark! No TV or telephones, but the vessels are equipped with marine radios.

This system affords the serious angler the greatest variety of fishing conditions and the opportunity to catch a variety of fish species such as tarpon, snook, bonefish, permit, several types of snapper and grouper, jack, barracuda, shark, mackerel and others.

Belize Zoo with all the native animals and snakes of Belize and even a toucan you can pet; San Pedro at Ambergris Caye, the old and new capital of Belize; local villages; wood carvers at work; Tikal in Guatemala and much more. These tours are guided either by members of the Heusner family or by guides selected by the Heusners. Belize River Lodge takes care of all local travel arrangements and accommodations.

Fishing from the Lodge Rates

Rates Do Not Include: airfare to and from Belize, fishing equipment and tackle, Belize fishing license ($25 per angler per week); alcoholic beverages, tips to guides and staff, Belize Departure Tax (approximately $39.75 US, per person).

Belize River Lodge is Catch & Release Only. Permit, Bonefish and Tarpon are always released; some Snook, Snapper, Barracuda and Grouper may be kept for the table.