If any river captures the beauty and mystique of salmon fishing in Iceland, it is the magical Miðfjarðará. Many veteran salmon anglers who’ve been lucky enough to sample many of the world’s best rivers, routinely rank Miðfjarðará as their very favorite.

Located in the Northwest, approximately a three-hour drive from Reykjavik, the Miðfjarðará is one of Iceland’s most productive and exclusive salmon rivers, frequently ranking among the very best. The popularity of this river stems from the broad diversity of pools, the gin-clear waters, as well as the abundance and average size of her fish.

The river system consists of the main river, Miðfjarðará, and its three tributaries, Austurá, Núpsá and Vesturá. Miðfjarðará is 15 kilometers in length and salmon run all of it. Austurá (the famed canyon branch) is fishable for 23 kilometers, or all the way to Vals-falls, Núpsá for 19 kilometers to upper Fosskots-falls, and Vesturá for 27 kilometers to Hyrnu-falls. Altogether this provides 84 kilometers (over 50 miles) of fishable water, in over 200 named pools. The rivers are fed by lakes on the high heaths above the valley, many of which are ideal feeding waters for alevins and parr. The heaths are fertile, with much vegetation, untouched by man, and unpolluted. They are among the great wetlands of Europe. From there the rivers run down to a peaceful agricultural district with a varied landscape. 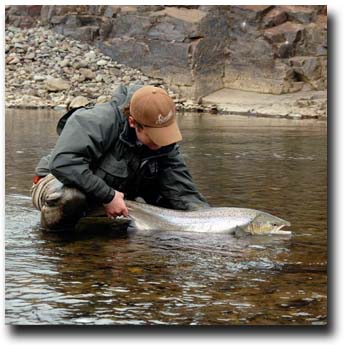 Like most of the northern rivers, Miðfjarðará is considered a big fish river. Grilse are large, averaging around 7 pounds most years and two-sea-winter fish usually range from 10 to 18 pounds, but are taken up to 24. Salmon begin entering the river the third week of June. Most of the early run fish are large two-sea-winter fish. The grilse run usually begins around the 10th of July and are generally heavy, well conditioned fish from 4 to 9 pounds.

The main Miðfjarðará is a medium sized river and her three tributaries vary from medium to small in size. Sink tip lines and weighted tubes fished on two-handed rods are often prevalent in late-June but by the 1st of July, floating lines, single handed rods and smaller flies are the norm. Miðfjarðará fish love the “hitch”. Either the popular European “hitched tube” or conventional flies with presented with the “Riffle hitch” provide thrilling surface takes. Access to most of the pools is relatively easy although the beautiful canyon beat on the Austurá, comprised of 46 pools, will require a fair amount of walking and some light climbing. Many devotees consider Austurá the most beautiful and interesting salmon water on earth.

For many years the average seasonal number of salmon caught in the Miðfjarðará was approximately 1,600 which ranked it among the top 10 rivers in the country.  Historically in Iceland, nearly all rod caught salmon were harvested. However in 2008, Miðfjarðará became one of the first Icelandic river to be managed as a total catch & release river, and the resulting increase in numbers and size was both immediate and dramatic. 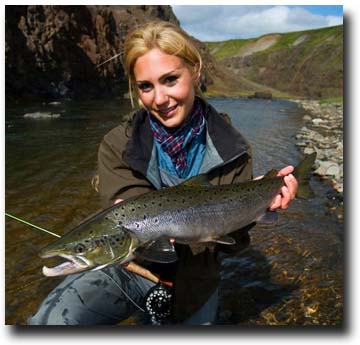 In 2009, Miðfjarðará lead all wild Icelandic salmon rivers with an amazing 4,004 fish (about a 4.5 fish per rod per day over the 90 day season!).  And 2010 was a duplicate with 4,050 fish. In 2015, the river produced 6,028 rod caught salmon, by far the highest number ever recorded for any natural salmon river in Iceland.  Through the 2019 season, the average annual catch has been 3,258, more than double the average catch prior to the introduction of catch and release!

The run begins in late June and through mid-July is comprised mainly of MSW fish, some topping the 20 pound mark. Mid-July marks the beginning of the grilse run and prime time which continues through August. This is the time period when daily rod catches can soar to double digits. September still produces excellent fishing for those willing to deal with the possible cold and inclement weather.

The recently remodeled and updated Laxavhammur Lodge is centrally situated midway between the west branch and the canyon branch. The lodge offers 10 double occupancy, twin-bedded rooms each with a private bath. Other amenities include a sauna, wader drying room, living room/bar and attractive dining room where gourmet meals are served. Chef Hákon Már Örvarsson, is renowned throughout Europe and is a past medalist in the Bocous D´Or Culinary Competition of Europe.

Miðfjarðará is fished in two daily 6-hour sessions; from 7:00 am to 1:00 p.m. and from 4:00 p.m. to 10:00 p.m. Because of the lengthy fishing day, rod sharing is popular giving each angler 6 hours of daily fishing. The river is limited to a maximum of 10 rods and is divided into five, two-rod beats in a rotation that changes after lunch each day. Experienced English speaking guides with 4-wheel drive vehicles are provided at a ratio of one guide for each two-rods.

Angler Adventures is pleased to offer packages for several the most desirable weeks of the 2020 season. Please call us for rates and availability.