The incomparable Minipi watershed is widely acknowledged as the world’s finest fishery for giant Brook Trout, with an astounding average size of right around 5 pounds. The Minipi is situated some 60 miles southeast of Goose Bay in Labrador’s remote wilderness. Accessible only by floatplane, the Minipi was first explored by fly rod legend Lee Wulff in the late 50’s. Lee recognized this as a one of a kind fishery producing a unique strain of thick bodied, beautifully conditioned brook trout. The fertile, shallow lakes are veritable insect factories with prolific hatches of out-sized mayflies, caddis and stoneflies. This abundance of aquatic hatches means that Minipi brookies are almost always “looking up” and specimens up to 10 pounds have been taken on dry fly.

Five of the current seven tippet class world records for Brook Trout have been taken in the Minipi system. Northern pike to 30 pounds are abundant and a unique strain landlocked arctic char up to 12 pounds are taken regularly as they stage for spawning in September. Fishing is restricted to fly fishing only for brook trout and char although spin or plug casting (single, barbless hook lures) is allowed on Minipi Lake. Because trophy brook trout are the main attraction, the incredible pike fishing is often overlooked; despite the fact Minipi Lake has also produced a current fly rod world record for pike, 25.5 pounds on 8-pound tippet. Catch and release is encouraged for brook trout, but anglers may take one trophy brook trout (6 pounds or better) per week for mounting. 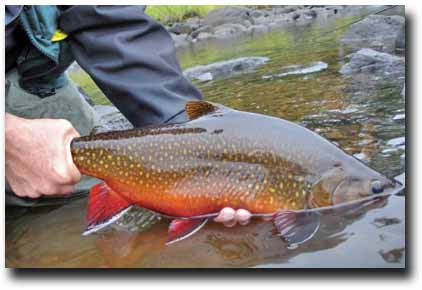 Access to this world-class fishery is via the Minipi Camps, owned and operated by Jack & Lorraine Cooper: Anne Marie Lodge and  Minipi Lake Resort.  The Minipi Camps operate from mid-June through mid-September. Week long packages are the norm, but custom packages of shorter duration may be arranged on request.

River and lake fishing is available at all of the Minipi camps. The lakes in the Minipi system are relatively shallow in most areas, allowing sunlight penetration to the bottom. This accounts for amazing insect life making this fishery a dry fly angler’s dream! Anglers are transported to fishing areas in aluminum boats and freighter canoes with 9.9 horsepower motors. Minipi Lake, which is a larger body of water (30-miles long), also has deep-vee aluminum hull boats with 30 hp 4 stroke engines to reduce run times up the lake. You fish two anglers per boat with an experienced, licensed guide, either casting from the boat, from shore, or while wading, depending on the area you fish.

A network of boats and canoes are stationed at various known hotspots better accessed by walking. Inlets and outlets are often productive areas as are “narrows” in the lake where there is good current movement. July is the peak mayfly emergence, although good dry fly fishing usually starts around the 20th of June and we have witnessed fishable hatches of giant “drakes” (Hexagenia) and caddis well into August. 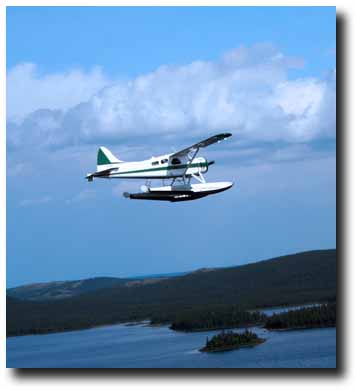 The “growing season” is short and these brookies take advantage and feed voraciously from ice-out (usually 1st week in June) until spawning time in the fall. These fish can pack on an additional 15 – 20% in body weight over the summer! As such, August usually produces the biggest fish (4 of the 5 current records). By the second 2 weeks in August, these big brookies begin staging at the inlets and outlets in preparation for their spawning run. The landlocked arctic char are caught early in the season, but during the warmth of summer, they seek refuge in the deeper parts of the lake. However, they begin staging for their spawning at the inlets and outlets in early September, the time that anglers have their best chances for trophy char.

Most anglers new to Labrador are amazed by the average size of both mayflies and caddis, which are often imitated on hooks as large as size 2. Most of the dry flies you’ll fish are in the 6 – 12 size range. The Wulff patterns are the most frequently fished dry fly patterns with the Grey Wulff being the most popular. But variations such as the Grizzly, Minonipi and the Royal Wulffs have their followers as well. Big, extended body “Drake” imitations, outsized caddis (Elk Hair & Goddard Caddis for example, and large stoneflies (like the Stimulator in orange or yellow), and a few Atlantic salmon Bombers round out a good dry fly selection. 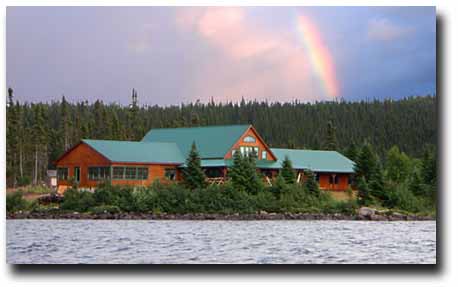 Anne Marie is the oldest and first opened in 1964. Perhaps because of its history and intimacy, Anne Marie has enjoyed a loyal following of repeat clients year after year. After 7 daunting years of construction in the Labrador bush, in 2011, the Cooper’s hosted their first guests at new luxury Ann Marie Lake Lodge, which replaced the aging Anne Marie cabin that had hosted fisherman for a half a century.

Minipi Lake Lodge, which first opened in 1988, is a modern multilevel structure featuring a 40 foot high, prow-shaved window wall overlooking Minipi Lake. The lodge is just 1/4 mile from the outlet into the Minipi River. The River stretch in the gorge behind the lodge is a “nursery” during most of the season and offers fast action for smaller brookies averaging 2 pounds. Late in the season when the big spawners enter the system, the average size increases. A short walk down to the gorge after dinner is a popular way to finish a great day on Minipi. The lodge accommodates a maximum of 10 anglers.

Little Minipi Lodge is also used only for daily fly outs. Besides inlet/outlets and vast lake areas, Little Minipi has a 1 ¼ mile section of river that holds very large brookies throughout the summer. Fish of over 9 pounds have been taken from the river. The outlet right in front of the camp is also one of the best staging areas for arctic char for the September run of landlocked arctic char. 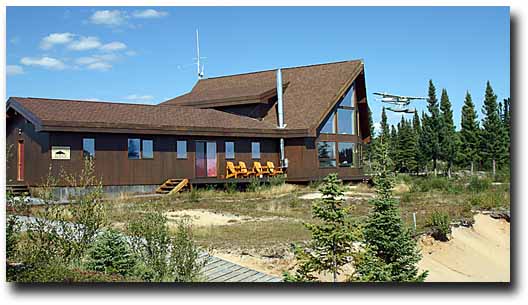 The daily schedule includes 4 meals. Typically, anglers head out after breakfast, usually not earlier than 9:00 am (Minipi trout are late risers), and stay out for the day, having a shore lunch at noon. Usually the best mayfly hatches occur around 2:00 in the afternoon. Guests return to the lodge for a 6:00 pm dinner, and head back out for the evening fishing. Summer days are long in Labrador (fishable light until 10:00 pm in late-June/early July), and your guides will stay late if you wish. Catching an evening spinner fall on the Minipi is nothing short of a magical experience! A final late evening meal is available when you return to camp for the night.

For 2020, Anne Marie will transfer on Fridays; Minipi Lake Lodge will transfer Thursdays. In most cases, guests will overnight in either Halifax or St. Johns and fly to Goose Bay the following morning, and take the float plane into camp that afternoon.