Camp Brûlé on the Petite Cascapedia offers classic Atlantic salmon fishing in the Grand Old Style, with comfortable, riverside accommodations, gourmet meals, great guides and fishing on three of Quebec’s greatest salmon rivers, all served up with the charm and ambience of bygone eras. Click here to watch a video about an anglers perspective on Camp Brule.

Camp Brûlé was originally built in the early 1880’s as the Petite Cascapedia Club. This historic lodge has hosted anglers from around the globe since 1883. The McWhirter family has been involved in the camp ownership and administration since it first opened. Current camp manager/guide, Kevin McWhirter represents a 4th generation of McWhirters affiliated with Camp Brûlé. The camp can accommodate conference groups of up to 18, but during salmon season accommodates a maximum of 8 rods.
. 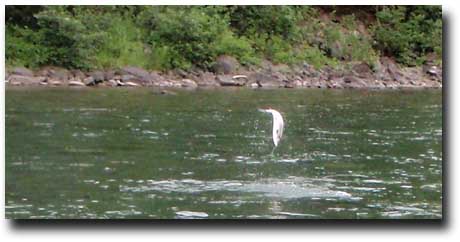 Nestled between the larger and more well known Grand Cascapédia and Bonaventure rivers, the Petite Cascapédia is a jewel of a salmon river and her devotees cherish her relative anonymity and are happy to let these other two receive the glory as well as the fishermen!

Originating in the Chic Choc Mountains of the Gaspé Peninsula, the Petite Cascapedia runs roughly 70 km into the Bay of Chaleur. Blessed with abundant spring feeds, the Petite is the coldest river on the Gaspé and during mid-summer, water temperatures average 55 degrees F. The Petite is a slightly later river than the Bonaventure or the Grand and prime time is considered June 20 – August 15. 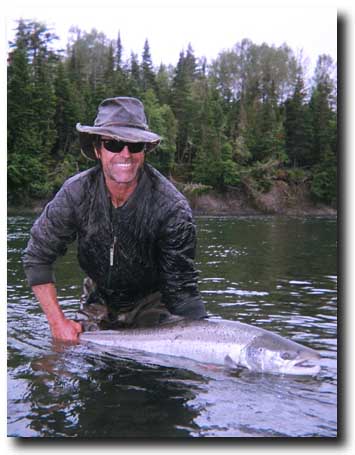 Renowned for gin-clear water, the Petite Cascapedia is an outstanding river for the dry fly, producing some very large (30 to 40 + pound) salmon. Petite salmon are also known as agressive takers, and most of the time if you locate a fish, you can get him to come to the fly. The river also hosts excellent runs of some of the largest sea-run brook trout in the world, sometimes topping 10 pounds.

Camp Brûlé is situated on the lower third of the Petite Cascapédia at the midpoint of their 5 kilometers (about 3 ½ miles) of private water. The camp water is divided into two beats, Upper and Lower with 12 productive pools, as well as several “pots” and “runs” that will hold fish. Typically, 4 guests will fish the “home water” (2 on the upper, 2 on the Lower), and the other 4 anglers will fish Bonaventure or upper Petite, and Societé water or their private water on the Grand. The upper beat of the Camp water starts at Mackenzie, a long and beautiful “ledge” pool that holds fish for several hundred yards and is outstanding dry fly water throughout. The famous Jack Louis Pool is also on this upper stretch and is one of the most productive pools on the river. Jack often is holding a hundred or more salmon by mid-summer. When it’s “on” the sheer size and productivity of Jack Louis will leave little or no time for two anglers to fish anything below it.

The lower beat starts at Burnt Jam, not only a good salmon pool but one that often holds many seatrout. Other feature pools on the lower stretch include the Upper Julienne’s Hole, Lower Juliennes and the beautiful Blue Banks. These are just a few of the stand out pools, but the guides frequently can spot fish holding in other pools or “pot holes” between the major pools, and it’s well worth it to stop, and cover those fish, either with a wet or dry fly. Brûlé salmon love their Bombers! 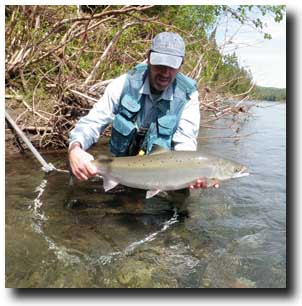 Outboard motors are not permitted on the Petite and Brûlé’s guides are masters at the dying art of poling a river canoe. Those fishing the Upper Beat are driven to a launch site 2 miles above the camp. Traditionally, two rods and a canoe will work each beat in the morning and then rotate down to the Lower Beat for the evening fishing. Both beats are fished either by wading or from the canoe. Brûlé fishes a traditional split day, from around 8:00 am – 1:00 pm, with the main meal served at midday. You return to the river for the evening session, from about 4:30 pm to 9:30, the most productive hours of the day.

Moving along in the standard rotation, anglers then rotate over to Brûlé’s private water on the A sector of the Grand Cascapédia just about a 20 minute drive from the camp. This consists of a series of pools, known collectively as Barter’s. The Grand of course is known as North America’s greatest producer of large salmon. Most seasons the Grand produces a half dozen or more fish topping the magic 40 pound mark. Guests may also pack a lunch and do a “day trip” to the Upper Grand fishing on either the Lake Branch or the Salmon Branch, both about an hour’s drive from camp. This is a combination of wade fishing and canoe fishing.

The remainder of your fishing time, you rotate through available water on either the Upper Petite above the camp, or over on the beautiful Bonaventure, about a 25 minute drive from the camp. Like the Petite, the “Bonnie” is also a crystal clear river renowned as one of the world’s best dry fly salmon rivers. While its salmon are slightly smaller average size than on the Petite or the Grand, the Bonaventure boasts the largest run of fish on the Gaspe, and still produces its fair share of 20 to 30 pounders. The Bonnie also receives strong spring feeds and stays cold all summer long. All three of these rivers, especially the Grand, boast high salmon to grilse ratios.

This is the typical rotation which offers the unique opportunity to fish 3 of Québec’s greatest salmon rivers within your week. But having all three rivers at their disposal, Brûlé maintains the flexibility to change up the rotation. If one river is fishing poorly, usually good fishing can be found on one or both of the other two. Having this flexibility to change up greatly enhances guests’ chances for a productive trip. 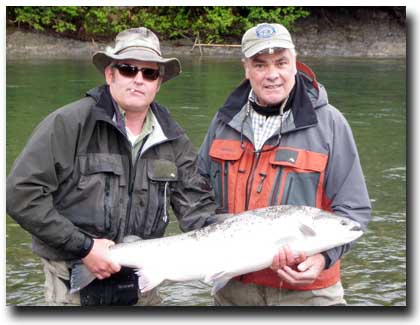 Camp Brûlé’s season begins around the 10th of June and peak season is from June 20th through the middle of August. Large salmon, frequently in excess of 30 pounds, begin moving in during the first three weeks of June. The bulk of the run through the summer months is dominated by salmon in the 10 – 20 pound range, enhanced by a run of grilse beginning around the second week in July. Fresh run fish are taken right through the summer and into September. Some of the largest sea run brook trout in the world have come from the upper stretches of the Petite. These run from May building to a peak around mid-August. The Petite also receives a fall run os salmon in September.

The Bonaventure is about a week ahead of the Petite most years, and usually produces consistently from the 10th of June. The Grand Cascapédia can offer some very good fishing even as early as the first week in June. All three rivers have fall runs beginning in late August.

Rates are fixed in Canadian dollars. During prime salmon weeks, June 16th – September, the rate is $5,500 per person based on two anglers sharing a guide/canoe (single rooms are available on request).

Included: 7-nights lodging; 6-days of guided fishing with one guide per two anglers; boats, motors and fuel; all meals; beer, wine and limited open bar (if you have a particular brand you like, please bring it with you); Salmon License (Quebec No Kill License)