The Restigouche River, Home of The Largest Atlantic Salmon Ever Landed in North America

On June 23rd, 1990, Ken Jamieson, member of the Ristigouche Salmon Club was fishing out of the Club’s Pine Island Camp on Cross Point Pool, about 6 miles above Red Pine Mountain Lodge. At 6:00 pm, using a 9 foot, 9 weight rod, a 15 pound test tippet and a #4 double Silver Rat, Ken hooked a VERY large fish. After a 1-hour & 15-minute battle, Ken was able to beach the monster (it dwarfed the net) and guide Charlie Adams, with the assistance of two passing canoeists, was able to measure and quickly release the massive fish. 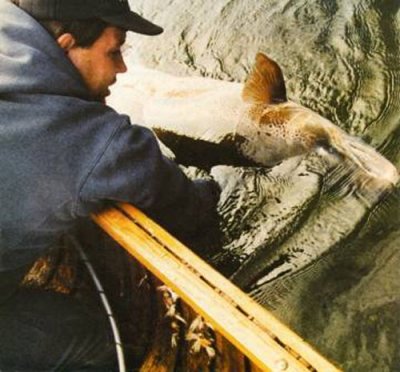 A Giant Restigouche Atlantic Salmon taken in June 1988 by Mike Crosby. Estimated weight, 60 pounds. No, it’s not a tarpon…and it’s not even the largest salmon from the Restigouche!

The giant salmon measured 68 1/2 inches in length and 29 inches in girth. Using the old William H. Wood formula, L X G squared divided by 800, this fish weighed an incredible 72 pounds. However, using the modern adjustment (considered more accurate for salmonids and nearly identical to the G.H. Maunsell formula from the 1933, “The Fisherman’s Vade Mecum), this fish would top 76 pounds. The Ally Gowan formula, developed over years from salmon that had been harvested, weighed and measured from the River Tay in Scotland, would put this fish at 86 pounds! Even using the most conservative Wood Formula as an estimate, at 72 pounds, this fish was clearly the largest Atlantic salmon ever landed in North America. (see formulas below)

Capturing a 50-pound Atlantic salmon is something that might occur once every quarter or half century. Well consider Jamieson’s monster salmon came just 2-years after Mike Crosby of Halifax released a fish estimated at 60+ pounds on the Restigouche (see photo above). And in the past 20-years, there have been numerous other releases of Restigouche fish topping the 50 pound barrier (most recently a 52 pounder in 2007)! At Red Pine Mountain Lodge, we’ve lost a few that we believe might have topped the magical 50 pound barrier (our lodge record is 47-pounds, weighed). But it’s only a question of time before some lucky angler at Red Pine breaks the 50-pound mark. Wouldn’t you like to be the one?