Atlantic Salmon at the Ryabaga Camp on the Kola Peninsula, Russia

Russia’s famed Ponoi River is without question the world’s most prolific Atlantic salmon river. The best way to access this incredible fishery is the Ryabaga Camp. Over the camp’s 20 + year history, they have averaged over 8,000 rod caught salmon each season. During the peak weeks, the average number of salmon caught is 40 per rod. Experienced anglers may double the average, with a few anglers exceeding 100 fish per week!

Located above the Arctic Circle, The Ponoi is the largest river system on Russia’s Kola Peninsula, flowing west to east for 400 kilometers before entering the Barents Sea on the southeastern tip of the Peninsula. The watershed flows pristine through largely uninhabited wilderness and is accessible only by helicopter. The Ponoi River is pollution free (no mining, deforestation, dams, netting, poaching or other encroachment by man) and the enormous runs of salmon return in much the same numbers they have for thousands of years. 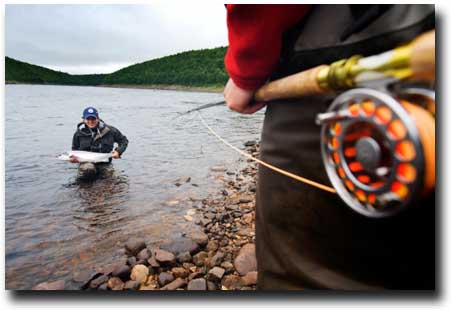 Consistent across a long season (late May through early October), the Ponoi sees massive and improving runs of aggressive, free-taking fish. The Ponoi provides Atlantic salmon fishing in two of its purest forms: almost all floating line fishing, and excellent opportunities to fish skated dry flies. The river provides a nice combination of great numbers of salmon, averaging approximately 9-pounds and large salmon, up to 30lbs. Fishing aesthetics are your choice. The shallow gradient and even bottom make this a wading anglers dream but both bank and boat fishing are available for those who prefer.

Managed as flyfishing only and 100% catch & release, Ryabaga Camp accommodates a maximum of 16 – 20 rods, depending on the week, and holds a long-term lease and exclusive use of 42 miles of productive water. The assigned beats are measured in miles (4 – 5 miles per beat) and provide more productive water than you can possibly cover in a days fishing. Each of the remote beats has access to river tents, equipped with stoves for lunches, warmth and safety. 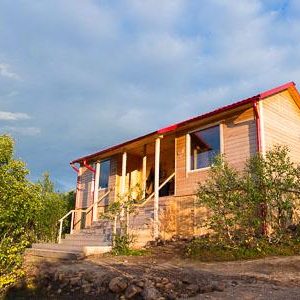 Ryabaga Camp was once described as “the world’s most comfortable tent camp”.  But in 2016, the camp was significantly upgraded and now each guest enjoys their own comfortable, warm, wooden cabin with queen-sized bed and ensuite bathroom with 24hr hot water, electricity and internet (email access). Ryabaga Camp stands alone with its level of service and accommodation. The cold mornings and chilly nights are now replaced by time to recharge for the next day’s battles and to dream of fish to be caught.

At Home in the wilderness 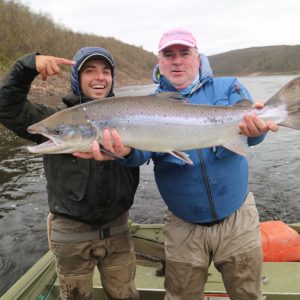 The “Big Tent” has both 110 and 220-volt electricity, as well as reliable satellite telephone, fax and Internet for e-mail communication. Along with the “Big Tent”, there are a number of other important buildings in the central area of Ryabaga Camp, nicknamed “Fish Street”: The kitchen, the sauna and shower building with 24-hour hot water and wood stoves, two heated buildings with four flush toilets each, drying tent, and the medical tent, which also double as the massage room.

The Ryabaga Camp Staff is comprised of twenty-nine staff: twenty-two Russians and seven international staff. The Russian portion of the staff is made up of five, highly skilled, mechanics, seven very experienced guides (some of whom guide in Argentina in the winter), four chefs, five long-serving camp staff, the massage expert, and the flight crews. The western staff is made up of five guides, the manager and the hostess. The guides are superb, service-oriented, English-speaking, and are anxious to put their expertise to work for you – real guides who know the river and can communicate.

To access the Ponoi River and the Ryabaga Camp, anglers will need to fly to the Murmansk Airport, typically accessed via Helsinki, Finland. From Murmansk, the only way to the Ryabaga Camp is a long helicopter flight to the Eastern edge of the Kola Peninsula. Bringing a book, dvd player, or ipod to pass the time is highly recommended. The view of the Russian Tundra during the flight is beautiful and illuminates just how remote and untouched the Ponoi really is.