60 Pound Permit Landed on Fly in the Bahamas 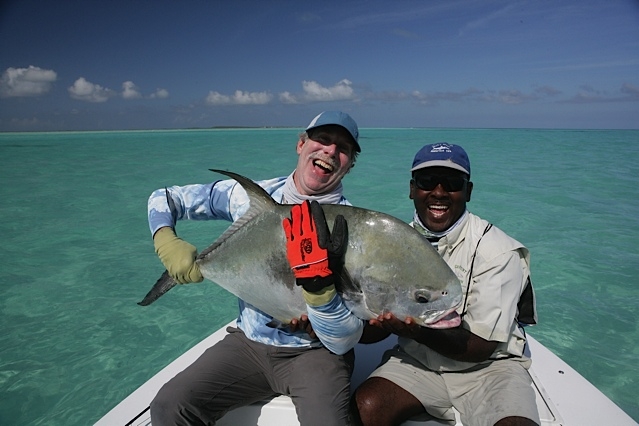 We haven’t stopped talking about Bob Cosgriff’s HUGE PERMIT since he sent us the first photo February 25, 2015 on his way home from the Bahamas.  You can read Bob’s write up and see a photo below.  More photos from Bob’s trip can be found on our Facebook Page.

These are the words we all long to hear. But let’s start at the beginning.

After several months of miserable winter weather my friend Capt. Barry Kanavy and I were looking forward to six days of fishing on Acklins Island at Grey’s Point Bonefishing Lodge.  Acklins is known for its bonefishing so we loaded up on equipment for the grey ghost.  Evan Peterson at Angler Adventures had suggested we hook up with the head guide at Greys,  Garon Williamson to show us around.

My motto is be ready for “anything”.  So that means 5 rods: Three eight weights for Bones, a nine weight for Permit and a ten weight for Barracuda .  Every thing was packed, lines cleaned, leaders checked and five boxes of flies; just the basics!

The week started with three days of fly tying as a cold front shut everything down. On day four & five the clouds parted and we got to experience what Grey’s Point is noted for, stalking bones on expansive wading flats. On our last day, I made a casual comment to Garon that we’d like fish from the boat and try our luck with the Cudas we had seen prowling the deeper flats.  That request would change our fishing lives forever. 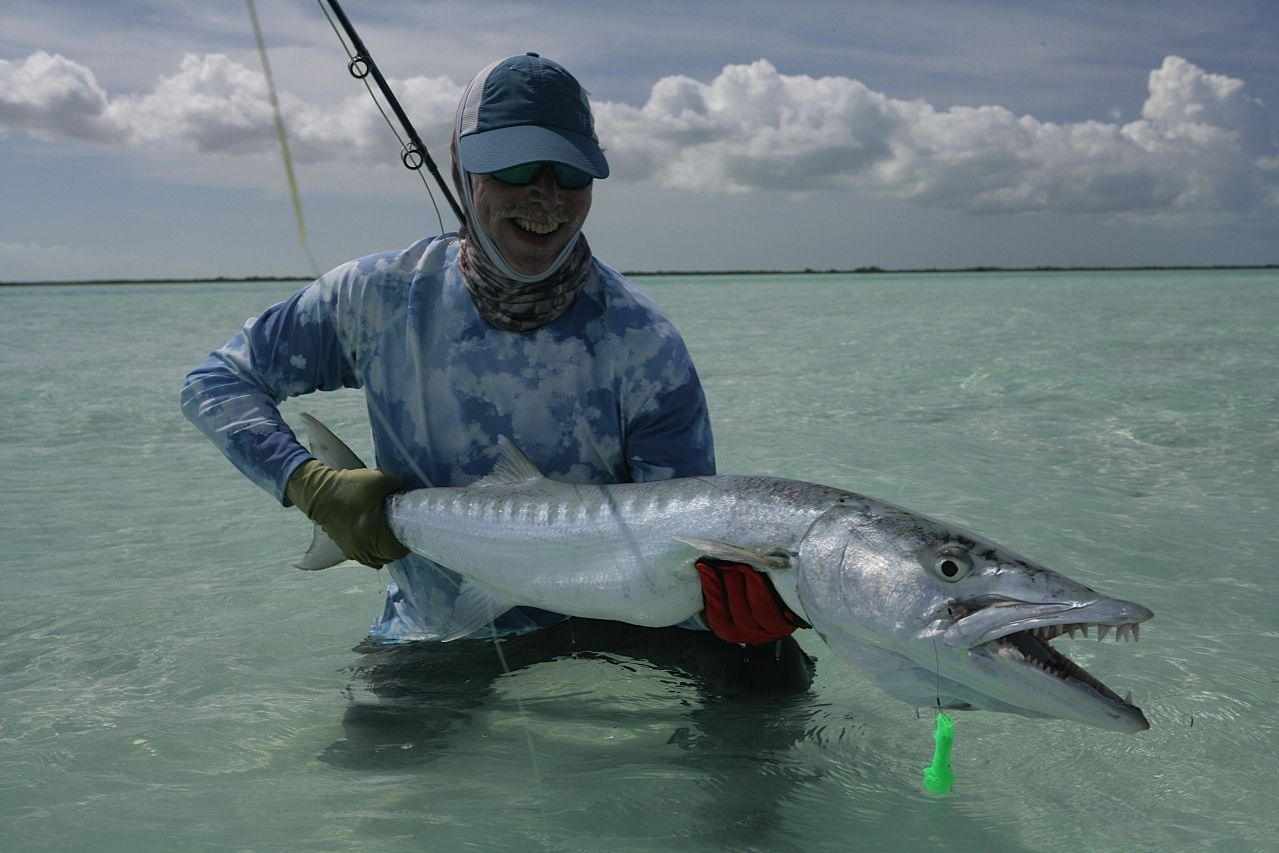 Two hours later Barry and I surveyed our frayed leaders, mangled wire, shredded Barracuda flies and some great photos to remember our time stalking these torpedoes.  Garon mentioned he had one more place to show us for barracuda and the occasional permit.

We motored over on the ocean side and cruised around for five minutes when I heard Garon call from the back of the boat “PERMIT – IT’S HUGE” …tailing behind a ray.

I jumped off the poling platform where I had been sitting and walked forward as Barry pulled out my permit rig of choice: Helios2 9wt, Nautilus NV reel , Rio 9 weight permit line connected to a  Rio 20lb leader, ending with a tan Kung fu crab size 4.  I was ready. I was confident.  After all I had recently tamed some bad ass cudas! I stripped out my line, saw the ray, and on my third attempt cast 65 feet landing the leader 2 feet over the ray.  I let the fly sink in the 5 foot water and then felt a small tug. I set the hook and the permit was on.  Things stayed pretty calm, the line cleared the deck and everything was under control.  I had caught small permit before, so how bad could this be? I would soon find out.

The fish then began a slow turn on my right side. Not a full run but a slow drive by so he could give me a once over. It was then that I realized Garon had been trying to keep me calm when he said, “huge Permit”.  It wasn’t huge, it was a monster! I felt my confidence drain as if I’d sprung a leak. I clicked down the drag three times . . . I was going to need all of it.  I looked at the nine weight in my hands and realized that I had brought a knife to a gun fight. Seconds later my reel started to scream and I said goodbye to my fly line for the next 35 minutes as the permit began his run to open water and large swells. Barry grabbed the back of my belt to stabilize me in the rolling water and to relay commands to Garon. Twice the fish surged out to deeper water and I was still hanging on. Then I looked down at my reel to see the backing getting very thin.  I estimated I had 50 feet left and yelled to Barry and Garon to fire up the engine and we slowly regained some backing only to have the fish take off again.  We kept this game up for 20 minutes until he made a run to some rocks on a point.  Now I had my moment of truth. I had to stop him from reaching the rocks, even if I broke him off. I swung the rod to the left, put as much pressure as I could and hoped he would turn before the rod exploded.  Ten feet from the rocks the fish turned and for the first time in the battle I felt I really had a chance to land this beast.

Slowly I gained backing and started to control his head.  Finally I saw my fly line coming back through the guides. 35 minutes had gone by and my arms and legs were on fire. Slowly he came to the boat moving back and forth using his body as a brake against me. He was three feet off the bow when I had a new panic attack that I had lost my leverage and the big fish was taking advantage of that.  Finally he came around the side, Garon touched the leader and grabbed the tail like his life depended on it.

Barry and I waited for Garon to stand up with our trophy, but nothing happened.  Then we heard him yell that the fish was too heavy. Barry grabbed Garon’s belt and back pack and pulled our guide back into the boat – holding the biggest permit we had ever seen.  The fish sat on the floor – We were stunned! No one did anything or spoke for 15 seconds, we just looked at a truly colossal permit.  We regained our composure and with both Garon and I holding the fish Barry took some quick pictures. 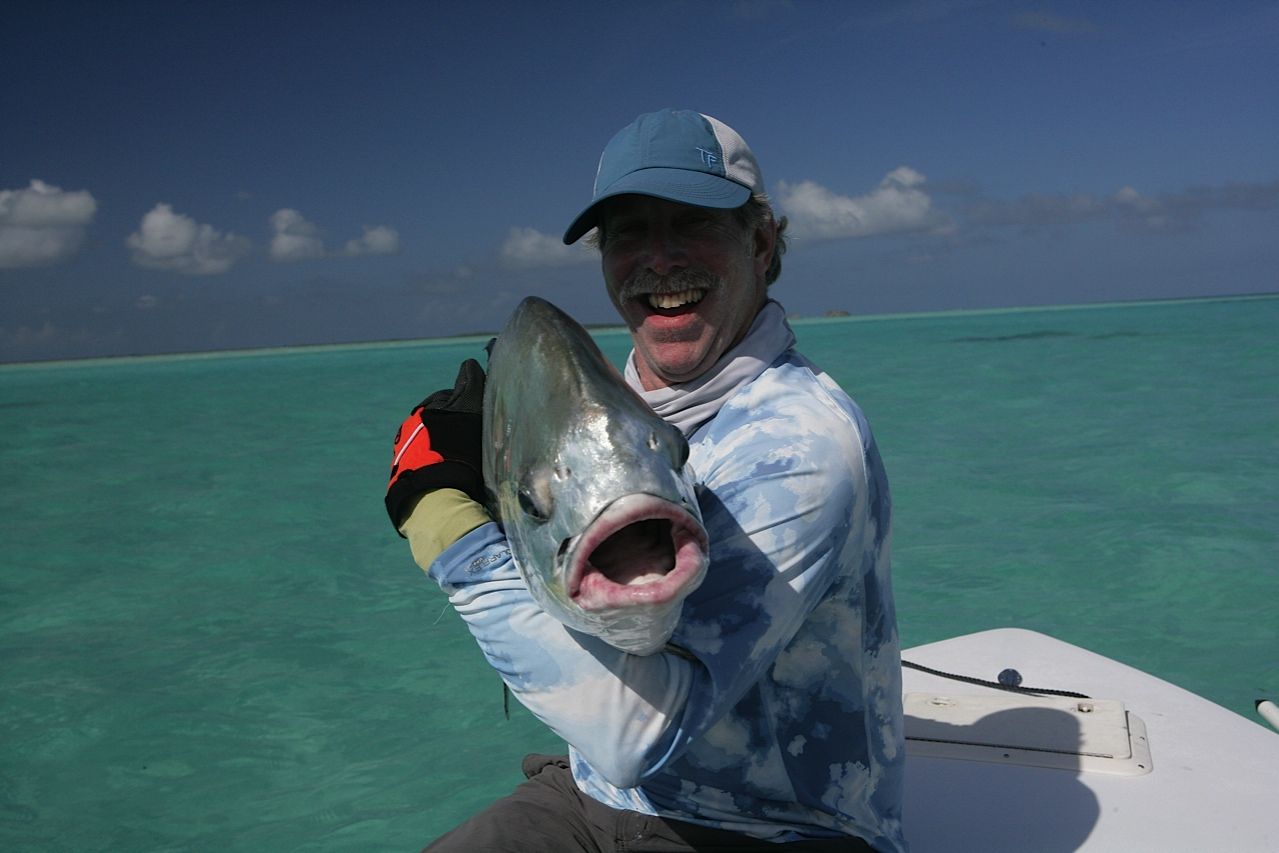 Now our efforts reversed as we scrambled to get the fish back into the water to live another day.  He was tired but slowly he got stronger and Garon let go of the tail as he headed off to deeper water.

How big was the permit? We estimated sixty pounds. Other veteran guides, after seeing the pictures say, 60-70 pounds – others less.  Is it a record? We will leave that to others to decide.  We quickly measured the length against the rod – 45 inches! The girth not measured but look at the photos – you guess.

All we know is that on February 24, 2015 something special took place out there.  Garon summed it up best when he said “We will fish the rest of our lives and never catch a fish like that again”.  Barry and I quietly nodded our heads as we slowly motored back to the lodge.  We were done for the day.

Ultimately, it wasn’t about breaking or claiming records.  The best part was watching the fish swim away.