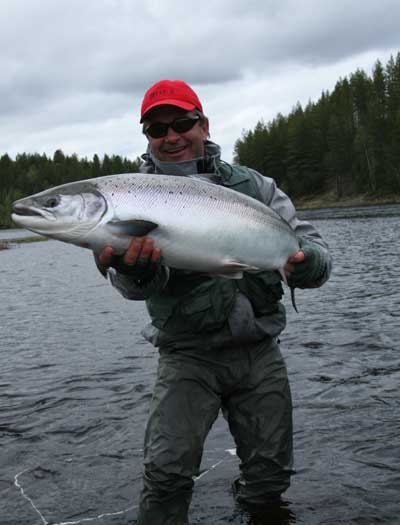 Russia’s Kola Peninsula is well known as having the best Atlantic salmon fishing found today anywhere in the world. Many anglers equate “best” with big numbers of fish. And rivers like the famed Ponoi River produce numbers that are staggering compared to any other salmon rivers in the world.

Where the yardstick of high quality fishing in most Canadian rivers is considered a 1 fish per rod per day, it’s not uncommon for anglers to land 40, 50 or even 60 salmon in a week of fishing on the Ponoi. While the Ponoi is considered the single most prolific salmon river in the world based on numbers of fish, the typical Ponoi catch is comprised of about 80% grilse or small salmon under 10 pounds. A smaller percentage will range 10 – 20 pounds, and a few over 20 pounds are taken each season.

Many seasoned salmon anglers tend to perceive the “quality” salmon fishing experience as one which presents opportunities to catch truly large Atlantic salmon. Targeting large salmon usually translates to a sacrifice in numbers landed. Many anglers would be happy with a 2 – 3 fish week that included one large salmon (anything over 20 pounds), or thrilled with a 1 – 2 fish week that included a “trophy” salmon (let’s say anything over 30 pounds). In most of the world’s salmon rivers, the possibility of a fish over 40 pounds (let’s just call these “monsters”) is a far-flung dream. But there is one incredible river system in Russia that produces good numbers of large, trophy and even monster salmon – the Kola River.

The Kola River is situated on the western end of Russia’s Kola Peninsula, just north of the Arctic Circle. The river flows northward from a series of lakes in the center of the penisula, eventually joining the Tuloma River 12 km south of the city of Murmansk. The Tuloma empties into the Barents Sea, north of the city. The Kola is a big, brawling river strewn with large boulders and many huge rapids, indicative of the powerful and enormous salmon that ascend her strong flows. 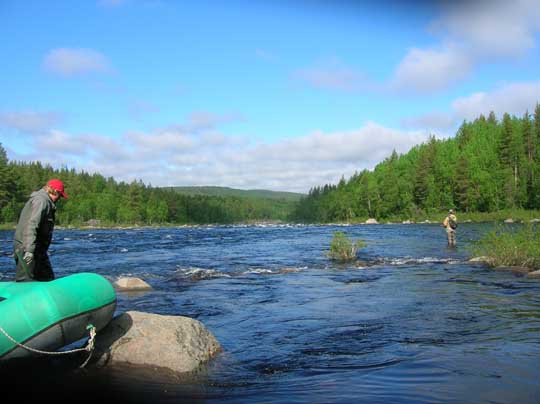 I fished the Kola the first week of July and found it to be, as advertised, an amazing big fish river. Before departing on July 9th, I checked the log book and tallied an incredible 185 fish over 20 pounds landed since June 1st! 67 of these were over 25 pounds, 17 were

over 30 and 4 eclipsed the magical 40 pound mark! The biggest landed to date this year was 44 pounds, but fish approaching the 50 pound mark have been taken, and fish larger than this have been lost! 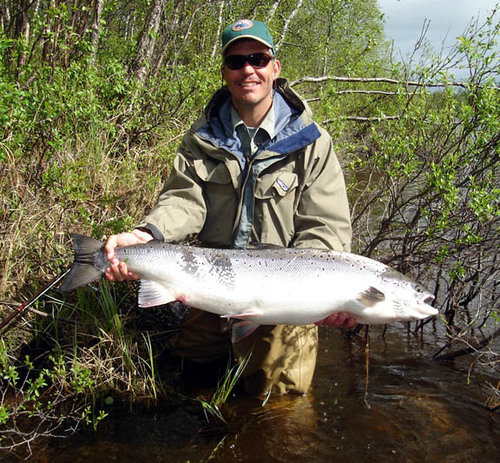 Dr. Jim York with a massive hen taken in Home Pool within view of the lodge!

Camp host, Frank Larsen told us the river was about 3 foot higher than normal for that time of year and the guides felt many of the salmon were not holding but were runnning right through on the high water. Depsite this, catch rates during my week were still impressive. Most anglers landed between 2 – 4 fish each day, and occassionally as many as 6. The top rod for the week finished with 24 fish. Individual catches of 30 – 40 fish per week are not uncommon in July with normal water levels. The grilse run had just started and about 30% of the catch reported were grilse. This ratio can increase to 50% by month’s end, but big salmon have been taken throughout July.

While many of the truly large fish move upriver in June, there were still some big guys around during my week. My biggest for the week scaled 27 pounds but there were numerous others that size or larger landed and several “monsters” were lost! I was among the unlucky, losing the largest salmon I’ve ever hooked. He jumped several times close to us so we had a good look at him. After 12 very exciting minutes, the hook just pulled out. Ilya, my guide estimated him at 20 kilos (44 pounds!).

The Kola is big water and favors long casters and even more so, accomplished Spey casters. In the water level we had, there is limited wading. I prefer to wade, and did wade everywhere it was possible. However, a number of the pools are only fishable from the boat, even in normal water levels.

Each angler has his own guide and inflatable boat. The camp fishes 16 rods in June and 14 in July. The Kola is divided into 7 beats. 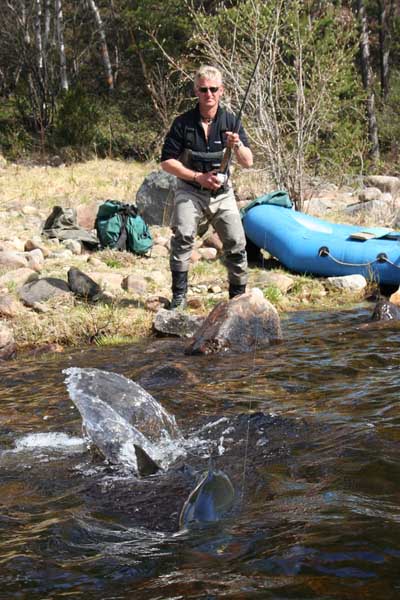 The beautiful Kitza River is the 8th beat in June, or may be taken as an optional beat in July. With the exceptions of Home Pool and Beat 3 which begins at Junction Pool where the Kitza enters, anglers leave the lodge each morning at 9:00 am by van trailering the inflatables. You are dropped off at the top of your assigned beat, and spend the day working your way down to the bottom. Some of the beats contain dangerous rapids and the guide will put you ashore to walk a path while he runs the rapids, so you need to be prepared for a fair amount of walking. Anglers are picked up at 7:00 – 7:30 pm and tranported back to the lodge. Dinner is served at 8:00 pm, and there is optional guided fishing from 9:00 – midnight for the diehards! There is no dark this far north in June & July.

Unlike the rivers of the eastern end of the peninsula, the Kola is not a wilderness river. The river valley was historically the transit route across the Kola from the White Sea to the Barents Sea, and today, a railroad track parallels the river and trains can go by with annoying frequency. Beat 5 actually runs through the small village of Loparsky. 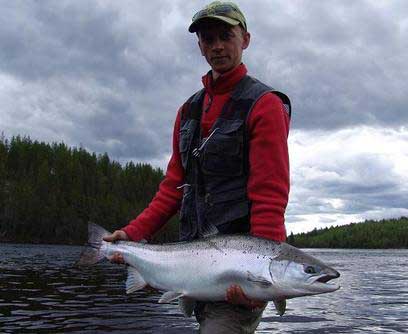 The Kitza in contrast is mostly a wilderness river. Lower Kitza is often taken in conjunction with one of the other beats. Fish a Kola beat in the morning, and then take Lower Kitza for the afternoon. Lower Kitza contains the famous Monster Pool. A good client of mine landed his largest Atlantic salmon ever in this pool 6 years ago. That fished weighed 22 kilos which is about 48.5 pounds!

You need to dedicate a day to fish Upper Kitza. This is the farthest beat from the lodge, about 40 minutes by car over rough road. Then it’s a 25 minute hike into the river. And the day finishes with an hour’s row across a lake to the take out spot! It’s alot of work bit it is worth the effort. Upper Kitza is not only incredibly beautiful, it can be extremely productive.

The Kola Lodge compound is just a few years old, and is vast improvement over the somewhat dubious hotel where anglers were accommodated in years past. The main lodge houses the kitchen and large dining room, a spacious living room area with satelite TV and large picture windows and a porch overlooking Home Pool.

Accommodations are in a complex of 17 individual cabins. Each angler has a private cabin with extremely efficient heating systems, a twin bed, table and chair, ample closet and shelf storage (plenty of hooks!), private bath with hot shower. There is even a heated front porch / wader drying room. All in all, an excellent set up.

Other camp structures include an open air dining room, a Finnish sauna, and the guides’ camp.

Coincidentally, several anglers in camp were on their second or third trip to Kola, but many of the others had fished the Ponoi at either Acha or Pacha camp the year or two prior. The lure of big fish had drawn them to the Kola. And by weeks end, all said they planned to return next year. 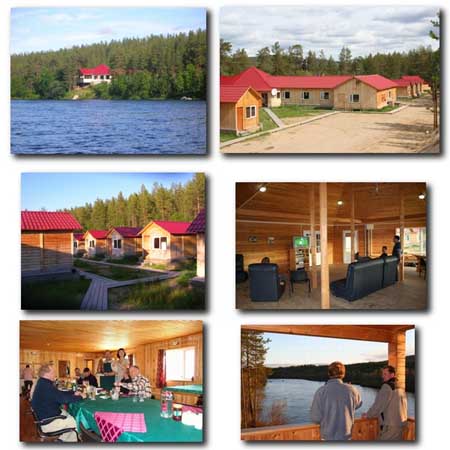 The Ponoi is arguably the greatest salmon river in the world and may be the obvious choice for anglers relatively new to salmon fishing, or visiting Russia for the first or even second time. For those anglers, we highly reccommend the Acha and Pacha camps. However, veteran salmon fisherman may prefer to challenge the monsters of the Kola. For truly large Atlantic salmon, the Kola River may be unmatched in the world. For reservations or more information on either the Ponoi or the Kola, please contact me.