The fertile waters off of Quepos, on Costa Rica’s south central Pacific coast, hold the greatest concentrations of sailfish during the winter dry season, (which Ticos refer to as their “summer”), which is from December – April. During this time of year, it’s not unusual to raise 10 – 20 + sailfish daily. Dorado, yellowfin and bigeye tuna, roosterfish and an assortment of other in and offshore species are plentiful. Marlin (blue, black & striped), while not abundant in this area, are also an everyday possibility. 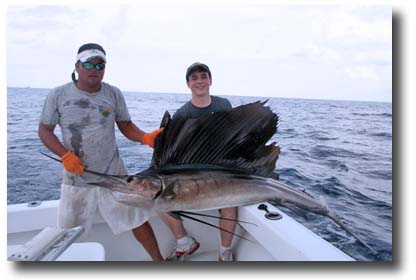 The Quepos winter season was first exploited by Sportfishing Costa Rica in the 1988/89 season. The initial “fleet” that first season, was a pair of 22 foot Boston Whalers. As word spread about this fabulous winter fishery, the Quepos fleet steadily grew. As December – April was off-season for sails in the northern Costa Rica areas such as Flamingo, captains in that area began moving their boats down to Quepos for the winter season there.

The oldest sportfishing operations in Quepos is JP Sportfishing Tours (JPT). Owned and operated by Jeannette Perez and her sons, JPT is a cooperative of some of the top boats working in Quepos. All JPT boats are equipped with outriggers, live well, fighting chair, tower, full electronics and top of the line Penn Int’l and Shimano tackle. All these captains have years of experience fishing Costa Rican waters with both fly and conventional methods. Click here to see the full fleet. 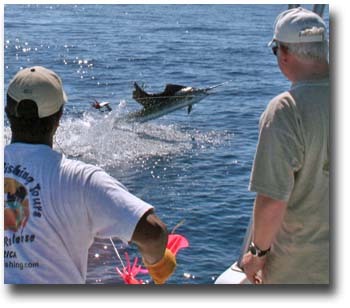 While JP Sportfishing Tours was founded in 1993, Jeannette Perez worked as operations manager for Sportfishing Costa Rica from 1988 until forming JPT in May of 1993. She brings over 20 years experience hosting international anglers.

In mid-May, JPT moves a portion of their operation north to Flamingo and offer packages in both areas. Also, custom trips to Drake Bay/Cano Island are available out of Quepos.

Prices are per person & Prices are subject to change