Casa Vieja is located on Guatemala’s Pacific coast, the unchallenged Sailfish Capital of the World. Casa Vieja’s captains have guided anglers to such astounding records as:

It’s clear that Guatemala has the greatest concentration of billfish to be found anywhere on this planet.

Casa Vieja Lodge was built over twenty years ago as the private retreat to one of Guatemala’s most prominent sporting families. Today, Casa Vieja Lodge is a classically styled sportsman’s retreat sure to delight guests who’ve fished the world over. Also, the lodge is surrounded by landscaped gardens and tropical foliage providing the ultimate in privacy.

At Casa Vieja, Sailfish are abundant year round and the fleet has averaged raising more than 20 billfish per day per boat – YEAR ROUND! Casa Vieja’s records show 40 plus sailfish release days have been experienced in every month of the year. Days with finicky or non-aggressive feeders are few and far between!

The larger sailfish up to 150 pounds are usually taken during the Fall, but for pure volume of 80 – 100 pound fish, December through June tends to be the rule. During this time you’ll be tantalized with 20 – 40 bites per day and, on some of those exceptional days, more than 100! 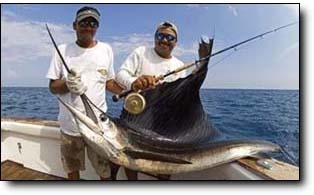 If you like to play the numbers, while targeting sailfish, Casa Vieja boats usually encounter a marlin about every third day during the year, however more can be seen by requesting a strictly marlin venture! Casa Vieja has lots of football size tuna and dolphin in the 20 – 40 pound range and impressive sized roosterfish are plentiful along the coastline within minutes of the docks. A day of inshore fishing can be an excellent way to round off your trip.

Casa Vieja boasts one of the most impressive fleets of gameboats skippered by a roster of some of the world’s most accomplished bluewater captains. Under the direction of Fleet Captain and television personality, Tred Barta, Casa Vieja’s skipper list reads like a “who’s who” of names well known to international billfishermen.

Packages Do Not Include: Cost of obtaining and maintaining a valid passport, Intl. airfare to Guatemala City, airport security tax of $3 ea; meals, drinks and touring outside the lodge; room tax of $28 per night (must be collected in Guatemala); laundry, top-shelf alcohol, gratuities to lodge staff, Captain, boat crews and drivers and items of a personal nature.

* * * Rates subject to change without notice and fuel surcharges may apply.* * *