Pacific Fins Guatemala Resort and Marina is a luxury fishing resort featuring a fleet with some of the newest, fastest and most luxurious sportfishing yachts in Guatemala providing access to what is without question, the Sailfishing Capital of the World. In addition to meticulously maintained sportfishing boats and top of the line Shimano tackle, guests fish with an experienced Captain and two seasoned mates, from some of the best offshore fishing crews in the world.

The Pacific coast of Guatemala features some of the world’s most consistently calm billfishing waters. Pacific Fins typically focuses the fishing program around a deep 15 miles wide underwater canyon, called the “Pocket”. Fishing days can start a mere 15 to 20 miles offshore or as far as 50 miles, depending on the fishing and the conditions. 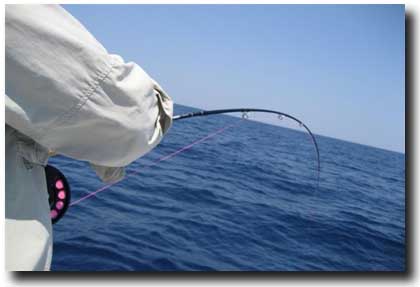 The crew on each Pacific Fins’ charter boat prepares a hot lunch for the anglers on board and serves snacks of fresh pineapple and mellon. Several of the crews make fresh Ceviche or Sashimi right in the galley.

Sailfish, Marlin, Dorado (Dolphin), and Yellowfin Tuna are the most common species in the Guatemala. On average, angler’s can experience 15 to 20 sailfish bites a day with 40 or more bites possible during the peak season (November through May). These Pacific Sailfish average 80 to 90 pounds, but fish over 125 pounds are common. Marlin can be caught year round in Guatemala but the largest concentrations seem to occur in late September through December. Pacific Fins has reported good Marlin fishing recently, with blue, striped and black marlin being caught, but 300 – 600 pound blues are the most common. 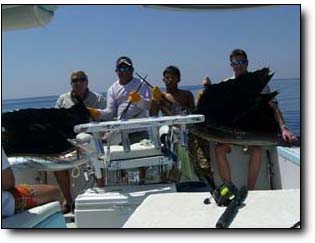 Sliding glass doors open on to a sun deck overlooking Pacific Fins’ landscaped, ocean-front grounds and the pool and dock areas. Along with the villas, Pacific Fins has individual private rooms available as well. Other amenities include a wireless Internet connection, free phone calls to the US or Canada, and gourmet meals. For after fishing relaxation, there is a full bar, a pool and a spa.