Here’s another excerpt from Dick Brown’s revised Bonefish Fly Patterns, which was re-released this summer.  At Angler Adventures, we’re really big fans of bonefish guides that can consistently find big fish.  The fly below was created by an excellent big bonefish guide at North Riding Point Club on Grand Bahama. 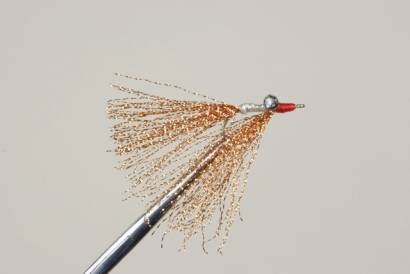 A Bully Bevans design. Sample in photo was tied by Bully on a size 4 34007 hook and measures horizontally 2″ in length from hook eye to end of tail; bottom tip of wing is about 1 3/8″ below hook shank. A second sample from Bully measured 2 1/2″ by 1 3/8″ on a larger hook. Fly rides hook-point up.

Anecdotes: New England fly fisher Ledge Mitchell was one of the first to use the fly, and he later scored a trophy fish with it. “Bruce Bauman and I were fishing with Bully at North Riding Point three years ago,” says Ledge. “We were doing OK but had had a couple of refusals, so I asked Bully if there was anything else we should try. He reached in his pocket and pulled out an all–gold-copper pattern, saying, ‘Try this.’ We had good luck fishing that fly— five bones, as I remember—and when I asked what it was called, Bully replied, ‘I don’t know.’ So I said to Bully, ‘I’m going to name it after you.’” A year later Ledge returned to NRP and took a 14-pound bone while fishing with fellow angler Carl Soderland and guide Deon Leathen. The fly? You guessed it—the Bully Special, which Ledge had tied on a big #2 hook. Author’s note: This fly, or one very similar to it, appears in the 2008 new and revised edition of Fly Fishing for Bonefish as the Deepwater Cay Club Fly. I have Ledge Mitchell (see his anecdote above) to thank for tipping me off that the pattern was, in fact, the Bully Special from the North Riding Point Club.

Bully Bevans is a superb bonefish guide. He is the North Riding Point Club’s “big fish specialist” and one of the guides most often requested by guests there. His fly has been extremely successful on Grand Bahama’s productive north shore.

Tying notes: Bully says he came up with this very effective big bone fly because he was out of flies and needed something to fish with for a client the next day. Good tying materials are notoriously rare in the Bahamas, so in a moment of pure serendipity, he tied his creation out of what he had on hand. It worked from the first day and is now his favorite fly. He ties it in sizes 4 and 6 only—he does not like it any bigger. He likes lead eyes for normal 11⁄2- to 2-foot depths and bead chain for shallower water, but none for tailing. Author’s note: I received three samples of this fly tied by Bully: two from Bully and a chewed-up sample from Ledge Mitchell (which may be one of the first Bully ever tied). One had I-Balz eyes and pink thread, one had unpainted lead eyes and brown thread, and one had nickel-plated eyes and fire orange thread . . . and all looked very fishy!