Gerhard Laubscher of FlyCastaway is visiting Angler Adventures in Connecticut next week and giving a couple of presentations about FlyCastaway’s cutting edge fishing operations on St. Brandon’s Atoll, Mauritius and Farquhar Atoll, Seychelles.  Both destinations offer spectacular fisheries that get almost no fishing pressure due to their remote locations and are priced like rare commodities, adding exclusivity to both destinations attributes (Farquhar prices at $7,500 US and St. Brandon’s prices at 6,500 Euro).

To get started, here’s the guides report from the April 4 – 11, 2012 week at Farquhar that included one of our clients, Steve Gross, who was looking to tally up as many species as possible. 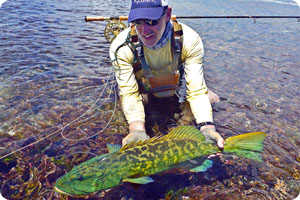 Like a tide eager to begin its initial surge, our new group of guests arrived on the shores of Farquhar champing at the bit to explore the multitude of flats and species Farquhar has on offer. After our customary quick briefing and some hasty rigging of tackle, the group which consisted of 9 men and one hard core fisherwoman set out to get a brief taste of what was in store for the rest of the week. The weather was set to be stable …we were hoping for an absolute cracker! 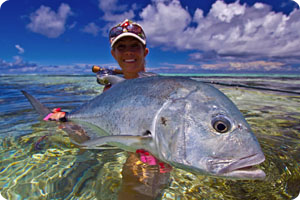 Yves quickly enticed his first Trigger to eat the fly. Jeff joining the action as he got stuck into a Milky as they are still here and feeding hard! Clare quickly showed the boys she was here to do business by landing the first GT, sadly her Dad. Finally after countless attempts, Wayne O finally managed to land his Trigger, which has been eluding him for years. And it didn’t end there for Wayne as he recorded our first Farquhar Slam, that being GT, a Bone and a Trigger in one day. Now that’s some serious angling and bragging rights! 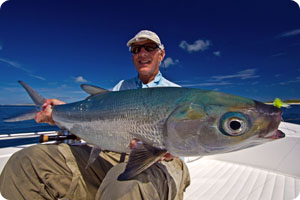 But back to the rest of the week, the Milkies were still hanging around and after and epic battle, Alex landed his first Milky, awesome fish Alex! His action didn’t stop there either, he also managed to land a GT and a Bone in the same day, quite an achievement. Good fishing was being experienced by all, although we did have a fair number of large GTs lost due to hooks pulling and lines breaking. Clare however had the pink touch (literally), and landed another good GT. Things were heating up and the pressure was on to get the desired species. 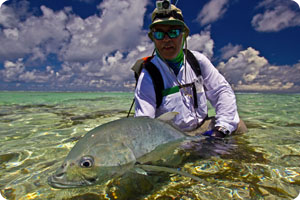 Ian subsequently also made his way in to the record book by landing all three of the species and Yves just failing to qualify by losing his GT. Wayne, Dean and Jeff had one truly memorable day whereby they landed 5 GTs, although Wayne did get smoked by a Yellowfin Tuna which tore off 300m of backing in less than 20 seconds late in afternoon! 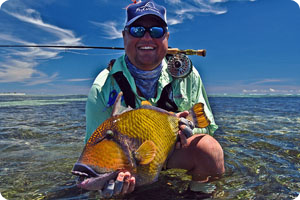 2 Slams in two days. Let’s make it 4 in three days. Dean and Jeff decided they also wanted a taste of that action and had no trouble landing a Trigger, a Bone and a GT. Piece of cake, all in a day’s work at the office….these were the comments around the dining room table each evening. Steve continued his species count and landed a truly impressive Napoleon. 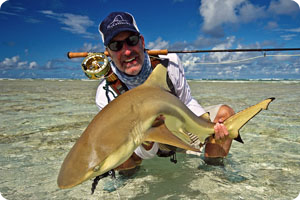 Last day out on the flats and Ian once again showed his metal landing a 98cm GT which was the largest of the week. Jeff and Wayne muscled in some Bumphead Parrotfish, whilst Steve braved “THE WALK” and reaped the rewards, landing Bones, Bluefin and two Blackfin Sharks. It was really good to have Steve out fishing with us after months of preparations and planning!

An amazing week of fishing with 4 Farquhar Slams, 15 GTs, 6 Triggers, 2 Napoleons, some Bumpheads, a Milkfish and countless Bluefin, Grouper and Snapper. That is what Farquhar is all about!